MARIAH's THOUGHTS on No Game No Life Aniime Series 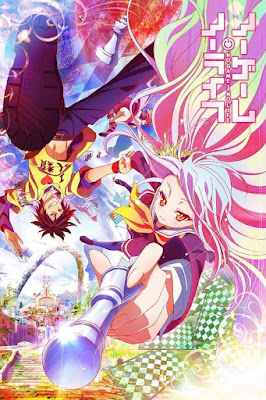 Based on the manga by:
Kamiya Yuu

Plot Summary:
No Game No Life is a surreal comedy that follows Sora and Shiro, shut-in NEET siblings and the online gamer duo behind the legendary username "Kuuhaku" or Blank, in English. They view the real world as just another lousy game; however, a strange e-mail challenging them to a chess match changes everything—the brother and sister are plunged into an otherworldly realm where they meet Tet, the God of Games.

The mysterious god welcomes Sora and Shiro to Disboard, a world where all forms of conflict—from petty squabbles to the fate of whole countries—are settled not through war, but by way of high-stake games. This system works thanks to a fundamental rule wherein each party must wager something they deem to be of equal value to the other party's wager. In this strange land where the very idea of humanity is reduced to child’s play, the indifferent genius gamer duo of Sora and Shiro have finally found a real reason to keep playing games: to unite the sixteen races of Disboard, defeat Tet, and become the gods of this new, gaming-is-everything world.

Without trying to spoil anything, No Game No Life a strong potential to exceed previous game related anime, it leaves little to no room for disappointment and a second season is highly desired by those in the comments section. The opening song and animation introduces us to the main cast and an overview of the world of Disboard. More like an advertisement than a serious anime opening, it’s bright, colorful, and childlike. It has representations of our mundane world but bursts into Disboard with its exuberant characters and pans over the entire cast of 12 episodes. The curious wonder children have about ruling over a world where games are law, is ever so present.

The overall feel of No Game No Life is fun, exciting, and comedic; not something to be taken seriously like Hellsing. The siblings, Shiro and Sora, always have their opponent right where they want them even if it looks like they’re in desperate situations. The games played throughout the series leave the viewer on the edge of their seat and sometimes surprised by the turn of events. The siblings are utterly confident in every battle they play because they are geniuses in the body of NEET’s (acronym for young persons “Not in Education, Employment, or Training”). While they take pride in being “the Blank,” their unbeatable gamer ego, they are unable to be actual social figures and crumble under the smallest amount of distance from their comfort zone, such as being barred from each other by a closed door. They are in charge of an entire species, the equivalent of Earth’s humans but on a smaller scale, and don’t take anything seriously if it’s not a win or lose game. Their faithful teammates, Jibril and Stephanie, add more light hearted fun to the anime with their either naïve or exaggerated personalities. Everything is almost too perfect for these shut ins.

The story of No Game No Life is any gamers dream but there are loop holes and character flaws that have been captured. While each of the main cast are likeable, sometimes to an extent, they have flaws that make them a little frustrating. There has to be a catch to Sora and Shiro’s dream world but the two gladly accept Tet’s invitation to join Disboard with no questions or concerns. They seem to be too perfect and not the least bit skeptical of this suspicious “God” that has taken them from home. Their enemies, while seeing the siblings as threats, are predictable; in that they underestimate the duo and will inevitably lose. One comment about Sora in particular is about his contradictory speeches. While humanity/Imanity is strong for gathering wisdom, it is also boring and weak? Will anyone be able to beat the “Blank?” And it doesn’t matter if they’re separated, the anime covers up that weakness too.

I’m sure a more practical and strategical viewer can dissect No Game No Life and find it stupid but I don’t think that was the purpose of it in the first place. It’s fun and joyous, meant to be lived in the moment. The ending leaves a huge cliff hanger and therefore No Game No Life a possibly successful season 2. Just like what Tet offered them, No Game No Life is an escape from a boring reality.

Posted by Mariah Bonifacio at 8:18 PM