RELEASE BLITZ: Heart of a Witch by Rebecca L. Garcia

Today, we are excited to share this Release Blitz celebrating the book birthday for Heart of a Witch, the second standalone title in the Embracing Darkness Collection, by Rebecca L. Garcia. To celebrate this new release, we have a sneak peek with an excerpt to share! So... Be sure to check it out and grab your copy now! 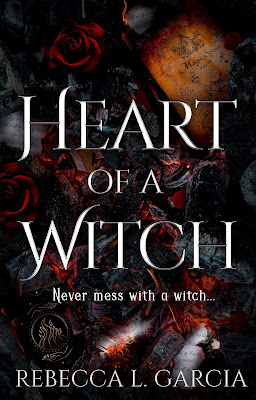 Genre:
New Adult
Dark Fantasy/Horror Romance
Series:
Embracing Darkness Collection, #2
Publish Date:
December 14, 2021
Synopsis:
A vengeful fantasy standalone romance perfect for fans of The Bridge Kingdom and A Touch of Darkness
I’d never particularly liked humans, but I’d never wanted to kill one. Until now.
Hidden in a kingdom that hates witches, I’m forced to hide what I am. With my sister working in a secret dark magic club, and our family’s shop gaining unwanted attention, things couldn’t be worse when the notorious witch hunter, Damian Shaw, comes to town.
When my sister shows up dead, and my family’s name is called into question, we’re forced to adopt new aliases and leave the home we cherished. As I watch my life fall apart, I vow to destroy the hunter responsible, but his punishment would not be swift. Death was too easy.
Redforest is a quaint town, with a church, pretty shops, and like any good town, a dark past. When my family and I move in, I set my sights on the Shaw family, quickly learning everything I can about them. Damian’s son, Elijah, is the hunter’s greatest pride. His heir. His confidante. The only family he trusts.
I come up with a plan. I am going to shatter every good thing in Damian’s life, ending with his son. My goal: make Elijah Shaw fall in love with me, twist him into the very thing his father hates, then kill him.
With my heart challenged, the attraction growing, I find myself trapped in a deadly game. In a twist of fate, Elijah might just end up being the death of me.
Embracing Darkness is a collection of standalone books set in the same world without an overarching plot, which means you can start with any books in the series and pick and choose which ones you want to read. This collection of novels follows different couples as they go from enemies to friends to lovers, while facing dangerous obstacles in a world split between humans, shifters, witches and gods, set in two kingdoms that separate them. 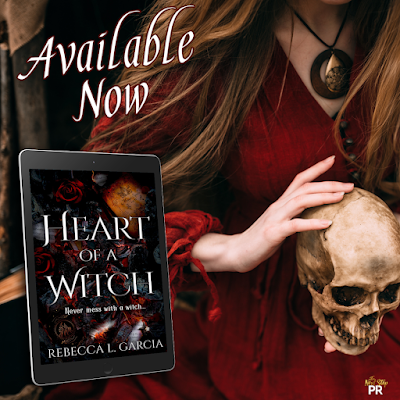 *Excerpt*
My dreams were like an ocean of layers. They got darker the farther I fell. Blue robes, daggers, and dead people haunted my nightmares, and in the last one before waking, shouting erupted, words pounding against my soul as I felt hands grab my arms.
My eyes fluttered open, and I jumped to my feet. I punched Cas in the arm, pushing him away from me. “What in the underworld are you doing?” I asked breathlessly.
Tears glossed his dark brown eyes. “I had to wake you! You were right.”
I ran cold. I’d never heard those words leave his mouth. “Cas?” I asked tentatively.
“It’s Ember. I waited up for her, but she didn’t come back, and it was almost three in the morning, so I went down to the club and…” His hand shot to his mouth, and a tear escaped into the gaps between his fingers. “The hunter attacked with his team. The whole place is torn apart, and they found dead bodies, sacrificed.” He paused for a short moment. “It’s enough to condemn everyone inside. I ran, but I couldn’t find Ember. I went to the kissing tree, but she wasn’t there. Y-you, don’t think she would have gone back to the club?”
My heart somehow felt heavier in my chest. “Where did he take them for trial?”
“He’s already begun the…” He tugged at his collar. “Punishments.”
Bile bit up my throat. “Where?”
“Town square. I was going there next.”
I pushed him out of the way and grabbed my boots, sharing a glance with my brother before running out the door. I prayed to deities I didn’t believe in that Ember was far away from all this. Anyone who’d heard of Damian Shaw knew that no witches passed a trial with him. If he caught us, we were already dead.
My stomach knotted as I ran toward the town square. Stars twinkled against the matte-black night, but the first hues of blue had already faded the speckled silver in the distance. It had to be four, maybe five o’clock, based on the sky. I’d heard he held trials at night because it was when he believed a witch’s powers were weakest. His logic was stupid, but then he was human and a priest to boot.
Please, Ember, don’t be there. Please.
If she was, then I’d have to expose us, because there was no way I was letting her die. I’d fight them. I should have brought weapons. I mentally kicked myself for not thinking of it back at the house. I heard footsteps behind me in the distance, but I didn’t turn to see who it was.
The town square was alight with torches and oil lamps, illuminating the freshly erected gallows and jeering crowd. My gaze climbed the wooden platform, and I found my worst nightmare come true. 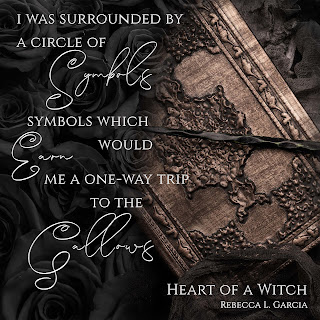 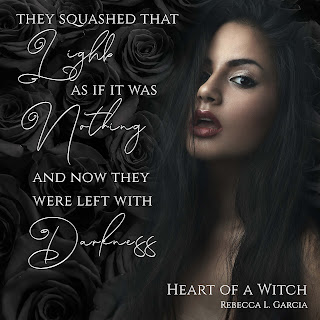 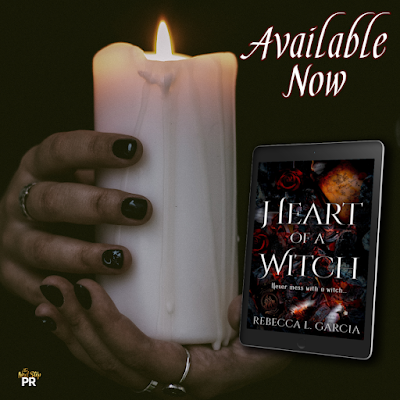 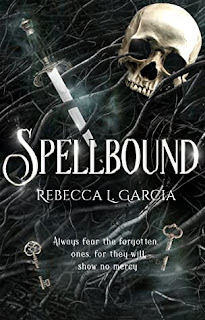 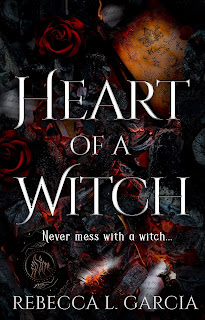 Rebecca L. Garcia lives in San Antonio, Texas, with her husband and son. Originally from England, you can find her drinking tea, writing new worlds, and designing covers. She writes fantasy romance. She devoured every book she was given and fell in love with magical worlds, and when she got older, her imagination grew with her.
When she's not writing or spending time with her family, you can find her traveling, and hosting book signings with Spellbinding Events.
Get your free eBook of Ruin when you sign up to Rebecca's monthly newsletter.
Stay connected with Rebecca L. Garcia

Posted by Jasmine Albitos at 7:11 AM