JASMINE's THOUGHTS on The Wolf Gift by Anne Rice 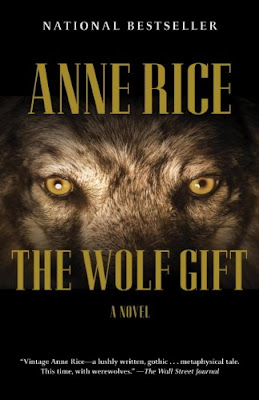 Genre:
Adult
Paranormal/Horror Romance
Series:
The Wolf Gift Chronicles, #1
Publish Date:
February 14, 2012
Publisher:
Knopf
Synopsis:
The time is the present.
The place, the rugged coast of northern California. A bluff high above the Pacific. A grand mansion full of beauty and tantalizing history set against a towering redwood forest.
A young reporter on assignment from the San Francisco Observer. . . an older woman, welcoming him into her magnificent, historic family home that he has been sent to write about and that she must sell with some urgency . . . A chance encounter between two unlikely people . . . an idyllic night—shattered by horrific unimaginable violence. . .The young man inexplicably attacked—bitten—by a beast he cannot see in the rural darkness . . . A violent episode that sets in motion a terrifying yet seductive transformation as the young man, caught between ecstasy and horror, between embracing who he is evolving into and fearing who—what—he will become, soon experiences the thrill of the wolf gift.
As he resists the paradoxical pleasure and enthrallment of his wolfen savagery and delights in the power and (surprising) capacity for good, he is caught up in a strange and dangerous rescue and is desperately hunted as “the Man Wolf,” by authorities, the media and scientists (evidence of DNA threaten to reveal his dual existence). . . As a new and profound love enfolds him, questions emerge that propel him deeper into his mysterious new world: questions of why and how he has been given this gift; of its true nature and the curious but satisfying pull towards goodness; of the profound realization that there are others like him who may be watching—guardian creatures who have existed throughout time and may possess ancient secrets and alchemical knowledge and throughout it all, the search for salvation for a soul tormented by a new realm of temptations, and the fraught, exhilarating journey, still to come, of being and becoming, fully, both wolf and man. 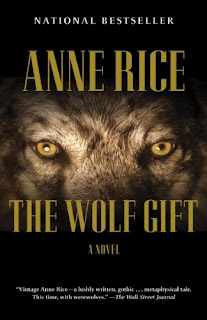 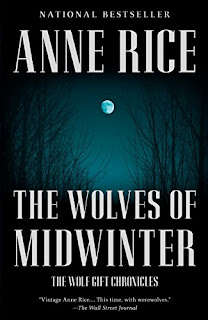 The Wolf Gift Book Launch & Signing on 02/17/2012
Book Signing w/ Anne Rice & Christopher Rice 11/02/2013
~~~~~
**About the Author**
Anne Rice (born Howard Allen Frances O'Brien) is a best-selling American author of gothic, supernatural, historical, erotica, and later religious themed books. Best known for The Vampire Chronicles, her prevailing thematical focus is on love, death, immortality, existentialism, and the human condition. She was married to poet Stan Rice for 41 years until his death in 2002. Her books have sold nearly 100 million copies, making her one of the most widely read authors in modern history.
She uses the pseudonym Anne Rampling for adult-themed fiction (i.e., erotica) and A.N. Roquelaure for fiction featuring sexually explicit sado-masochism.
Stay connected with Anne Rice

~~~~~
***My Thoughts***
Note: This Review contains NO spoilers
(Reviewed August 13, 2021)
I finally got to reading Anne Rice's new book, The Wolf Gift. Well known for her gothic horror novels, such as the famous Interview with the Vampire, Anne Rice takes on werewolf lore. Again, when I picked up the book, I read a variety of mixed book reviews on Goodreads. Although she is known for her gothic horror, The Wolf Gift is a far departure from her vampire novels. As in her vampire novels, the place is New Orleans, but this time, she takes it to the west coast to Northern California. Again, I picked up this book with a bit of excitement because it was written by Anne Rice!! C'mon!! Since I was first introduced to Anne Rice's writings when I read Interview with the Vampire, I have been eager to read her books. Mind you, I haven't read all her novels, but the ones I have read, so far, has taken me on exciting and thought provoking journeys. Including her Christianity days, I read her Christ the Lord Out of Egypt novel. She opened the door to the possibilities of what could have happened. I even enjoyed that read. I just adore her descriptive writing. She can easily whisk her readers to the places where her novels take place...as I was when I read The Wolf Gift. If you're looking for that supernatural horror/action, then do not expect this novel to be it. It dives more into the philosophical challenges that the hero struggles with after he is bitten.
The Wolf Gift tells the story of Reuben Golding, a young reporter with a poetic and literary heart, is assigned to do a story on the famous home of Felix Nideck. High in the bluffs above the Pacific, the mansion is surrounded with the beauty and the mesmerizing history of the Nideck family which sits next to a towering redwood forest. It is here that our hero, on this fateful night, was bitten by some unseen wolf-like creature. After surviving a night of such savagery, Reuben embarks on a journey of transformation as he struggles to find answers to what he has become.
This thought provoking story between man and beast had me turning the pages through Reuben's exhilarating journey of accepting what he has become and the responsibilities that comes with it. In addition to Reuben's struggle, he seems to have found someone to share this struggle with. Someone who was able to understand him and accept him as he is. Yes, a love story did develop and grow. On the other hand, to some extent, the dialogue between Reuben and his brother, Jim, turned into a religious philosophical discussion. Because of this, Reuben's internal turmoil between his conscience and his wolf instincts made it difficult for Reuben to understand the changes he was going through.
All in all, I enjoyed Anne Rice's luscious description of Northern California, as if I was transported to those redwood forests. I would not hold high expectations on reading a typical werewolf novel, since Anne Rice took The Wolf Gift in to another direction. I'd say keep an open mind. It seems to me to be a story of struggle.. be it religious, philosophical, physical and/or emotional. Anne Rice takes us on Reuben's journey on finding himself and accepting it. I found it to be a good read.
My rating:

Posted by Jasmine Albitos at 2:30 PM