MARIAH's THOUGHTS on The Conjuring: The Devil Made Me Do It (2021) 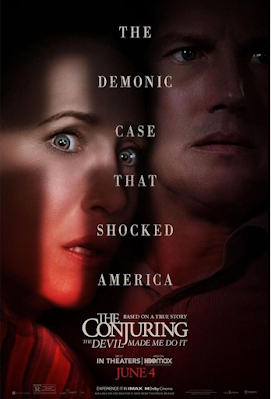 Cast:
Vera Farmiga, Patrick Wilson, Ruairi O'Connor, Sarah Catherine Hook, Julian Hilliard, John Noble, Eugenie Bondurant, Steve Coulter, Shannon Kook, Vince Pisani
(For full cast and crew on IMDB)
Plot Summary:
The Conjuring: The Devil Made Me Do It reveals a chilling story of terror, murder and unknown evil that shocked even experienced real-life paranormal investigators Ed and Lorraine Warren. One of the most sensational cases from their files, it starts with a fight for the soul of a young boy, then takes them beyond anything they’d ever seen before, to mark the first time in U.S. history that a murder suspect would claim demonic possession as a defense.
source
~~~~~
*My Thoughts*
The Conjuring: The Devil Made Me Do It involved law, reality, and the demons or themes that when combined piqued my interest. It was based upon events from the 1981 trial of Arne Cheyenne Johnson. In 1981, the Warrens were working on the case of a demonically possessed David Glatzel, Johnson’s brother-in-law. Arne, seeing that his fiancée’s brother was in pain, invited David’s demon into himself setting off the events of the movie. The atmosphere was consistently sinister by using religious symbolism, contrasting lighting, dark hallways, ominous soundtracks, and creepy glowing eyes. Throughout the movie, there wasn’t a moment to breath or take a break because the demon continued to haunt Arne and the Warrens which led to the central culprit who released the demon into the world, an occultist who become fascinated and obsessed with the Disciples of the Ram. To a new person watching a movie from The Conjuring universe, The Devil Made Me Do It was easy to follow despite jumping from scenes between Arne in prison and the Warrens who were investigating in Massachusetts. Ed and Lorraine Warren were pushed to their physical and spiritual limits as they collected evidence of demonic activity and save Arne’s soul from the demon. The Conjuring: The Devil Made Me Do It surpassed its predecessors as it not only had well timed scares but an engaging story for those interested in biblical studies or demonology.
The only regrettable thing in this movie is the demon being a throw away character. The demon isn’t named or given a chance to show its true form. It is an entity that could have taken a life of its own but disappeared as quickly as it appeared.
My rating:

Posted by Mariah Bonifacio at 12:19 AM

Email ThisBlogThis!Share to TwitterShare to FacebookShare to Pinterest
Labels: HBO Max, horror, Mariah's Thoughts on, mystery, review, The Conjuring, The Devil Made Me Do It, thriller, Warner Bros. Pictures