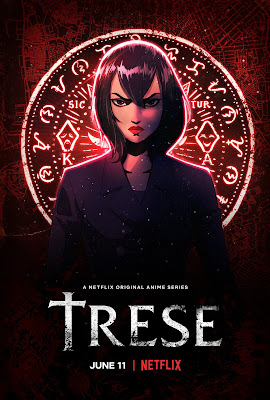 Genre:
Horror/Anime/Crime Procedural
Action/Adventure/Mystery/Supernatural
Series:
Trese
Season:
1
Rating:
TV-MA
Episodes:
6
Run Time:
25-33 minutes
Release Date:
June 11, 2021
Based on:
Trese by Budjette Tan and Kajo Baldisimo
Plot Summary:
When it comes to the supernatural, the cops have Alexanda Trese on speed dial. Set in Manila and based on the award-winning Filipino comic, Trese brings horror folklore like you've never heard before.
In Manila, where dark supernatural forces pervade the criminal underworld, it’s up to Alexandra Trese to keep the peace — but there’s a storm brewing.
source
Voice Cast:
Shay Mitchell, Liza Soberano, Jon Jon Briones, Darren Criss, Manny Jacinto, Dante Basco, Nicole Sherzinger, Lou Diamond Phillips, Steve Blum
See Full Cast & Crew on IMDB
~~~~~
*My Thoughts*
So... I binge watched this first season of Trese, based on the Filipino horror comic of the same name, on Netflix. I enjoyed watching this supernatural/crime procedural series, especially when it is set in Manila. An entertaining introduction into the world of Alexandra Trese with more to tell. Trese has a lot of stories to tell, especially when working with a lot of Filipino superstitions and folklore.
Although I did not grow up in the Philippines, with the little I did learn while growing up in the few years of living there, Filipino culture is so rich with an incredible amount of history and beliefs. It was fun to see some of the Filipino superstitions made into a series. Just like in an episode of Grimm featuring the aswang. Loved that show! Trese has that same concept as those TV shows: Grimm, Constantine, and others in which someone is tasked with keeping the balance between the human and supernatural worlds.
Anyways, on the other hand, the characters needed more development. The characters seemed to fall flat, the interactions seemed stiff. As for voice casting for the English dub... Really?!?! Why not use actual Filipino actors, not Hollywood actors who are just "a little bit" Filipino, and yet, never grew up in the Philippines. That's probably why I wasn't too sold on the characters being Filipino. Hmmm... 🤔
Well, other than that, Trese Season 1 is a good start as an animated series with a strong foundation to build on: the rich history and folklore of the Philippines and its people. I think fans of these genres (horror,supernatural,mystery) would enjoy watching Trese.
My rating:

Posted by Jasmine Albitos at 9:42 AM