JASMINE'S THOUGHTS on The Furies by Katie Lowe 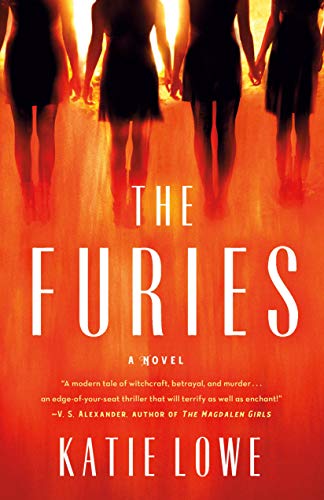 Synopsis:
This page-turning, harrowing debut is the story of a girl trying to fit in, whose obsessive new friends and desperation to belong leads her to places she'd never imagined...dark, dangerous, and possibly even violent.

She's posed on a swing on her boarding school's property, dressed all in white, with no known cause of death. Whispers and rumors swirl, with no answers. But there are a few who know what happened; there is one girl who will never forget.

One year earlier: a new student, Violet, steps on the campus of Elm Hollow Academy, an all-girl's boarding school on the outskirts of a sleepy coastal town. This is her fresh start, her chance to begin again in the wake of tragedy, leave her demons behind. Bright but a little strange, uncertain and desperate to fit in, she soon finds herself invited to an advanced study group, led by her alluring and mysterious art teacher, Annabel.

There, with three other girls--Alex, Grace, and Robin--the five of them delve into the school's long-buried grim history: of Greek and Celtic legends; of the school founder's "academic" interest in the occult; of gruesome 17th century witch trials. Annabel does her best to convince the girls that her classes aren't related to ancient rites and rituals, and that they are just history and mythology. But the more she tries to warn the girls off the topic, the more they drawn to it, and the possibility that they can harness magic for themselves.

Violet quickly finds herself wrapped up in this heady new world of lawless power--except she is needled by the disappearance of a former member of the group, one with whom Violet shares an uncanny resemblance. As her friends' actions take a turn for the darker and spiral out of control, she begins to wonder who she can trust, all the while becoming more deeply entangled. How far will these young girls go to protect one another...or to destroy one another?

Advance Praise on The Furies

“[With] a subtle, persistent, and unmistakable creepiness.... Murder and witchcraft mix with a heady cocktail of drugs, booze, and revenge in this elegant, pitch-perfect coming-of-age story.” ―Kirkus

“The Furies is a haunting tale of angry, young women, the fates they hold and furies they possess. Katie Lowe steers her juggernaut through twists of madness, revenge and murder to a finish that resonates deeply. It still hasn’t left me.” ―Peter Filardi, screenwriter of The Craft

“Dark and alluring, Katie Lowe’s debut novel, The Furies, is a sensory buffet of beautifully gritty prose and a plot that combines witchcraft, murder and the power of angry young women searching for vengeance.” ―Shelf Awareness

“Donna Tartt’s The Secret History meets Emma Cline’s The Girls in this taut, intense, and unputdownable debut. Lowe’s depiction of adolescent female friendships is at once unthinkably dark and uncomfortably real. The Furies will leave you breathless.” ―Corrine Sullivan, author of Indecent

“Powerful and atmospheric…those who thrill to dark coming-of-age tales with a dash of the uncanny will find much to enjoy.” ―Publishers Weekly

“Lowe’s dark, suspenseful debut combines the teenage sisterhood of The Craft and Emma Cline’s The Girls with the violent schoolyard vengeance of Heathers [and] poetic, lurid prose.” ―Booklist

“Katie Lowe is a magical wonder! The Furies, a modern tale of witchcraft, betrayal, and murder, combines the linguistic pyrotechnics of Poe, the Gothic sensibilities of Daphne du Maurier, and the psychological suspense of Shirley Jackson in a disturbing, edge-of-your-seat thriller that will terrify as well as enchant!” ―V. S. Alexander, author of The Magdalen Girls

“The Furies is a deliciously disturbing tale of obsession, rapture and the excesses of youth. Both fast-paced and beautifully written―rarely has a story this driven and diverting been so ecstatically told. The Furies is destined to become a book passed from paw to grateful paw. Unapologetically dark, and all the better for it, this smart, sinister novel exults in its dazzling prose and dangerous themes.” ―Christopher J. Yates, author of Grist Mill Road and Black Chalk

“The Furies can be described as Prep meets The Craft, while managing to be a dark, weird creature all of its own. Witches, murder, and teenage girls - this is the book of my dreams. I am obsessed.” ―Louise O'Neill, author of Asking For It
source

Katie Lowe is a writer living in Worcester, UK, whose debut novel The Furies is published by Harperfiction (UK), St Martin's Press (US) and eight other territories worldwide.

A graduate of the University of Birmingham, Katie has a BA(Hons) in English and an MPhil in Literature & Modernity. She returned to Birmingham in 2019 to complete a PhD in English Literature, with her thesis on female rage in literary modernism and the #MeToo era.
source

Truth be told, The Furies gave me a combination of The Craft  and/or Heathers vibe to it which is not too bad of a comparison since I loved both movies. The synopsis alone reveals a lot about what the book is about. I would have to say this was written well enough, but not enough to keep my interest. Needless to say, I continued reading since I did find the story intriguing. The Furies also delves into real issues that are currently being faced by many of young adults. Katie Lowe's writing incorporates these real issues into the story with direct respect, truth, and care. I found this dark coming-of-age story had depth and insight with a touch of mysticism. But, in the end of this book, was it "magic" or real.

I can say that this wasn't really "my cup of tea" per se, but The Furies had various elements, such as: mystery, witchcraft mythology, and coming-of-age elements, that kept me reading. Then, in the end, Katie Lowe leaves a thought-provoking and insightful ending that will give readers something to ponder over. The Furies is a good start for a debut novel.

Posted by Jasmine Albitos at 3:50 PM