Welcome to the Official Blog Tour for Dive Smack by Demetra Brodsky! On our tour stop today, we have an exclusive excerpt AND a cool giveaway to share!!!! Check out all the blog tour festivities below and grab your copy today!!! Follow the tour, HERE!!! 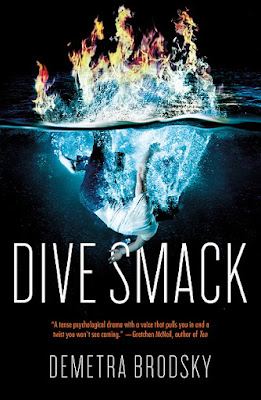 Synopsis:
Theo Mackey only remembers one thing for certain about the fire that destroyed his home: he lit the match.

Sure, it was an accident. But the blaze killed his mom and set his dad on a path to self-destruction. Everything else about that fateful night is full of gaping holes in Theo’s mind, for good reason. Maybe it’s better that way. As captain of the Ellis Hollow Diving Team, with straight A's and solid friends, he's only one semester away from securing a scholarship, and leaving his past behind.

But when a family history project gets assigned at school, new memories come rushing to the surface, memories that make him question what he really knows about his family, the night of the fire, and if he can trust anyone—including himself.

I know what Chip’s getting at. Flying solo is a diving no-no—a safety issue—but I wasn’t entirely alone. The Langfords’ black Lab was looking out for me, the way she’s done for as long as I can remember. Chip’s mom trained her to follow us to the pool and bark like hell if anyone is floating facedown in the water. It’s a cool trick I’m glad I’ve never seen used in a real emergency. But now, I can’t hear a dog barking without thinking something is wrong.
Belly comes running to the sound of our voices, paws muddy from digging holes in the yard, and leaps into the pool with a giant flop, true to her name. Water splashes everywhere. Not that it matters. The rain last night already left everything slick, and the air heavy with the stench of fresh dirt and dusty old basements.
“Why didn’t you wake me up?” Chip shields himself from Belly as she shakes dry. “I could have kept an eye out and done some laps with the snorkel to power up my lungs.”
“I needed to get my head straight before school.”
Chip nods.
He understands. For the most part.
My dad died a year ago today, making me an orphan, more or less. Chip and I talked about it on the way home from practice last night, what it would be like if one variable had changed. But I live with my grandfather now, who I call GP. He used to be a hero, the Ellis Hollow fire chief, but he fell into a bottle of whiskey after my dad died and hasn’t been the same since.
I get it. And I don’t.
It’s not like he’s the only one who lost people.
“What do you think The Mack Attack would say if he saw you balking every other approach on the board today?” Chip asks.
Good question.
My dad, Mitch Mackey, was a sports psychologist known as The Mack Attack by his clients because he attacked whatever problem they were having. He usually had plenty to say to me when things weren’t going my way. But it’s not my dad’s words that haunt me today. It’s Mom’s. When I first started diving she said, “Your mind will betray you before your body; acknowledge your fears and do it anyway.” I get that now more than ever. Diving is as much mental as physical. She was selective with how much she’d coach me unless I asked for help. But she also had a way of knowing when I needed her before I ever said a word.
Drove my dad nuts.
He used to call Mom The Diving Whisperer, like it was some big joke. Dad made his living fostering excellence in others, but it was Mom who had a knack for spotting which of his clients would go to the big leagues. And she was usually right. But I could tell something about those coincidences drove him a little crazy. That’s what killed him in the end. Not the accident—work—his obsession with being able to pick the right athlete after Mom died. He had a heart attack while driving to see an important client. I kind of saw it coming. He was on edge after Mom died, flying off the handle without much provocation. I wish I’d said something about the way he was acting when I had the chance. But I didn’t. In a way, I guess that’s my fault too … It’s complicated.
“Never in your father’s life was silence an answer.”
Right. I almost forgot the question.
I clasp my hands behind my neck and squeeze. “He’d probably ask something obvious like, ‘What did you learn from your last mistake?’”
“And?”
“I need more height, like you said. I’m coming in short and fast.”
“Then take it up. Girls don’t like a guy that comes too fast. Take it up, then slow it down, but speed it up. Control is the name of the game.”
“Sounds like a personal problem, Chip.”
“If you don’t believe me you can always ask Iris. Inquiring minds want to know.”
“Idiotic minds want to know. Maybe you should take it up with Amy.”
“No can do, brother. I already know the answer to that question, and I value my life.”
“You mean your sex life.”
“Potato. Po-tah-toe.”
I flip him off and walk back to my starting position.

What Others Are Saying About Dive Smack

"A tense psychological drama with a voice that pulls you in and a twist you won't see coming, Dive Smack is an instant Hitchcockian classic!" —Gretchen McNeil, author of Ten

"This riveting debut will plunge readers into an accelerating coil of twists and turns as if in free fall, plummeting them from a precipice as they cling to the dwindling hope of safe entry into the mysterious darkness below." —S.A. Bodeen, author of The Compound

"In an impressive debut, Brodsky injects her teen drama with ambiguity, and a subtle hint of paranormal phenomena, leaving readers to guess at what’s really going on. Strong characters and a compelling mystery make this a real page-turner." —Publishers Weekly

"A taut thriller with a twist ending that will blow your mind." —Kim Liggett, Bram Stoker Award-Winning Author of The Last Harvest

"Complex, thrilling, and with a pitch-perfect narrative voice, Dive Smack will leave you on the edge of your seat and unable to put this one down." —C. Desir, author of Bleed Like Me

“A taut roller coaster of a thriller chock full of dark family secrets, twisty lies, and finally, the redeeming power of truth.” —Michelle Zink, author of This Wicked Game

Demetra Brodsky is an award-winning graphic designer & art director turned writer. She has a B.F.A. from The Massachusetts College of Art and Design and lives in Southern California with her family of four and two lovable rescue dogs where she is always trying to make more time for the beach. Dive Smack is dedicated to Pumpkin, the monarch butterfly she once saved from the brink of death. Once you read the book, you'll understand why. 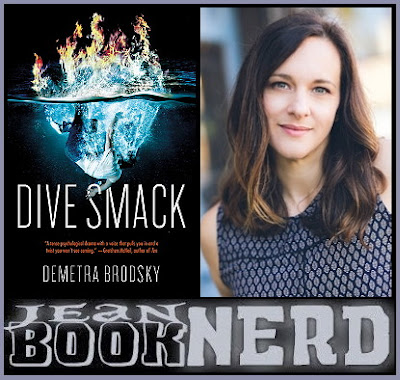