BLOG TOUR: The Fairies of Sadieville by Alex Bledsoe

Welcome to the Official Blog Tour for The Fairies of Sadieville, the sixth and final title in the Tufa series, by Alex Bledsoe. On our tour stop today, we have an exclusive excerpt AND a tour-wide giveaway to share! So... Check out all the blog tour festivities and grab your copy now!!! Oh, and follow the tour, HERE!!! 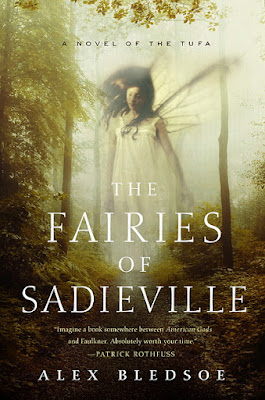 "This is real." Three small words on a film canister found by graduate students Justin and Veronica, who discover a long-lost silent movie from more than a century ago. The startlingly realistic footage shows a young girl transforming into a winged being. Looking for proof behind this claim, they travel to the rural foothills of Tennessee to find Sadieville, where it had been filmed.

Soon, their journey takes them to Needsville, whose residents are hesitant about their investigation, but Justin and Veronica are helped by Tucker Carding, who seems to have his own ulterior motives. When the two students unearth a secret long hidden, everyone in the Tufa community must answer the most important question of their entire lives -- what would they be willing to sacrifice in order to return to their fabled homeland of Tir na nOg?

*Excerpt*
And now he stood in that same office, two days after Doc’s funeral, preparing to sort through a lifetime’s accumulation of things that were both junk, and priceless.
“At least,” his girlfriend Veronica Lopez said wryly, “he left something behind.”
“Too much,” Justin said.
“Well, nobody ever thinks they’re really going to die, do they?”
“Especially Doc,” Justin agreed.
“When you pass seventy-five, though, you ought to take some precautions,” Veronica said. “Like maybe going to the doctor occasionally.”
“He lived like he wanted. He died the same way.” The police, called when Doc failed to show up for his office hours, found the old man on his couch, headphones on, a smile on his face. Justin had not been able to find out what he was listening to when he died, but whatever it was, he was glad it left the old man happy in his final moments.

“As always, Bledsoe infuses his setting with a rich sense of location, atmosphere, and history, underscored by folk music; the secret tragedies of the Tufa unfold over multiple eras before returning to the present....Bledsoe’s series continues to enthrall with complex and nuanced stories.” ―Publishers Weekly

Praise for the Tufa series...

“Long Black Curl makes me so happy that there are authors writing real North American-based mythic fiction...one that sits so well it feels like it's always been a part of us.” ―Charles de Lint

“Beautifully written, surprisingly moving, and unexpected in the best of ways.” ―Seanan McGuire, New York Times bestselling author, on Wisp of a Thing

“Haunting. . . . It's a mixture: folk tales and folk songs, updated with a dose of Sex and the City. Or, you might say, a rustic version of 'urban fantasy,' with its suggestion that there's mystery just around the corner, hidden behind even the dullest small-town facade.” ―The Wall Street Journal on The Hum and the Shiver

“Captures the allure and the sometimes sinister beauty of the Appalachian backwoods.” ―Library Journal, starred review, on Wisp of a Thing

“It's no secret that music stirs the soul, and combining that with a folk-tale setting makes a deeply heart-rending novel." ―RT Book Reviews (four stars) on Long Black Curl

“With his subtle, character-driven approach, Bledsoe skillfully fuses music, legend, and regional atmosphere to create something that feels like an unexplored corner of American mythology.” ―Publishers Weekly on Chapel of Ease

“A fine installment in the popular series and a fine way for newcomers to join in the fun.” ―Booklist on Chapel of Ease

“This book is a graceful merging of magic and mundane that charmed me to my core.” ―Bookworm Blues on Chapel of Ease

“A fun, fascinating read that revels in elements of folklore, magic realism, and just good old fashioned suspense and interpersonal drama.” ―Our Lives Magazine (Madison, WI) on Chapel of Ease

Catch up on the Tufa series...

**About the Author**
Alex Bledsoe is the author of the Eddie LaCrosse novels (The Sword-Edged Blonde, Burn Me Deadly, Dark Jenny, and Wake of the Bloody Angel), the novels of the Tufa (The Hum and Shiver, Wisp of a Thing, Long Black Curl, and Chapel of Ease), and the Memphis Vampires (Blood Groove and Girls with Games of Blood).

Bledsoe grew up in Memphis, Tennessee. He now lives in Madison, Wisconsin. 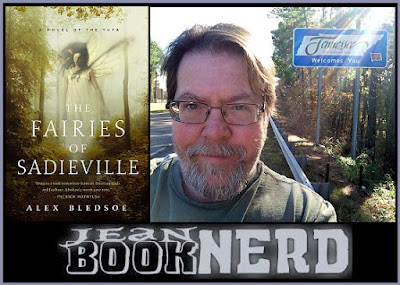