Today, we have an exciting Blog Tour for Road to Eugenica, the first title in the Eugenica Chronicles, by A.M. Rose! Our tour stop, we have an exciting excerpt to share! Plus, there is a cool tour-wide giveaway! So... Check out the blog tour festivities and be sure to grab your copy now!!! 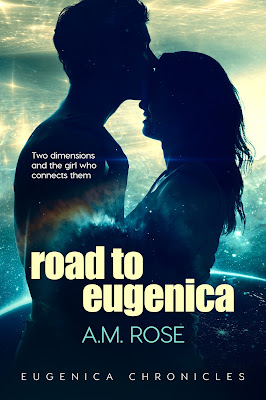 Synopsis:
Two dimensions - And the girl who connects them.Yesterday, Drea Smith couldn’t do anything spectacular—even walking and texting at the same time was a challenge. But today, she suddenly has more answers than Google, can speak and understand numerous languages, and she can fight. Like a boss.Super freaky.Drea has no idea where her encyclopedic knowledge has come from, but she’ll take it when she discovers someone out there knows her secret and wants her badly. And that they’ve been searching for her since she was born.Since she was created.With the help of her best friend Dylan, who just wants to keep her safe, and Maddox, a mysterious new boy who is prepared to get her answers, Drea will have to push her new skills to their limit as she uncovers nothing is quite what it seems.As she uncovers…Eugenica.

*Excerpt*
I press my way through gyrating bodies, trying to get as far away from everything as possible. There, sitting on a black leather couch in the corner all alone, is Maddox.
I exhale a long breath, thankful nothing happened to him. I feel silly for being so worried about them ten minutes ago.
The potent scent of alcohol hits me as soon as I sit down next to him. “Hey, what are you doing over here all by yourself?” I have to lean in close to his ear so he can hear me over the music.
“Drea! Have you ever had one of these?” His words are slightly slurred as he holds up a glass half full of red liquid with an orange slice floating on top. “I was sitting here with a bunch of people and they told me I was way too stressed out. So they gave me this drink. I think they called it a relaxer.” He takes a gulp.
I wipe away a drop of sweat rolling down the side of my face. Today’s been more than stressful for all of us, and we’ve been dealing with it in our own ways, me hiding in the hotel room. Dylan… I take a breath. This trip has been hard on all of us. “How many have you had?”
“Oh, I don’t know.” He waves his hand in the air and holds up his fingers. “Two or three. I lost count.” He waves his hand again, dismissing the idea. “They totally work. I feel way more relaxed! Here, you want some?” He hands the drink to me.
I know I shouldn’t, but with everything else that’s happened, I bring the glass to my lips. It’s sweet like fruit punch and goes down easy. Too easy. I set it on the table in front of us and push it out of reach. “Maybe I should take you upstairs so you can lie down.”
“Not yet. There’s something I want to talk to you about,” he says and my pulse speeds up. Could he want to tell me that I’m not imagining things after all? And this thing I think happened in Hollywood really did? His head swivels around like he’s looking for something. Or someone. The Green-eyed man. Is he here? I do a check around the room myself, and when I’m satisfied I don’t see him, I turn back to Maddox. He’s bobbing his head along to the beat.
I tap his arm. “Okay, what is it?” I keep the excitement out of my voice.
“What’s what?”
“You said you wanted to tell me something.”
“Oh, yeah. Let me ask you something.” He leans in closer. “Were you ever expected to do something you didn’t want to do? But you couldn’t say no.”
I shrug and my heart sinks with disappointment. Not exactly what I hoped for. And I’m not sure what he’s getting at, or if it’s the alcohol talking, but either way I humor him, hoping it will get us off this couch sooner, and then back up into the room where it’s safe. “Sure, I guess so.”
He leans in even more, swaying back and forth. “What did you do?”
I put my hands on his arms to help steady him. I’m not really sure what to say. There’ve been times I haven’t wanted to do something I was told to do. Like when Mom would say to clean my room, and I’d shove everything in my closet or under my bed. “I don’t know. I guess I figure out a way to get it done. And maybe it wasn’t exactly the way they wanted. But I figured if I have to do it, I’m going to do it my way. Like the saying goes, there’s more than one way to skin a cat.”
“You’ve skinned a cat?” He sounds horrified as he pulls away from me, almost falling in the process.
I grab him and pull him back up to a sitting position. “Of course not! It’s just an expression.”
“In that case, you really are a genius. Did you come up with that yourself?” He stares at me with wide eyes. But before I can respond, he says, “That’s it. I’m going to do it my way and then no one can be mad because it still got done. You know?” He sits, swaying back and forth a little before continuing. “I really like you and Dylan. You’re the first real friends I’ve ever had. You guys are awesome. Have I ever told you how awesome you guys are?” This time he grabs my arms and steadies himself. We lock eyes. Intense sapphires have me catching my breath.  “You are awesome and beautiful… You’re so beautiful, and smart and funny—and beautiful.”
His voice gets softer, but I still catch every word. He glances from my eyes to my lips. My heart pounds so hard in my chest I’m afraid it’ll break through, but I can’t move. He leans in, his lips barely touching me at first and then firmly pressing against mine. His hands caress the back of my neck and he pulls me deeper into him. Like complementing colors, we blend together seamlessly, creating the perfect mixture.
We separate only for a second before I pull him back. His lips are soft and hot as my hand runs along the stubble on his jaw. Kissing him feels better than I ever could’ve imagined. He tastes like sweet fruit and alcohol.
I jerk back. “No. Stop.”
He pulls me toward him, but I resist. There’s hurt in his eyes. But he’s drunk, and kissing me could mean absolutely nothing to him tomorrow, when it means absolutely everything to me right now. 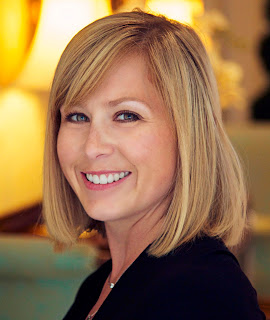 A.M. Rose is the author of Road to Eugenica, and writer of young adult novels of all genres as long as they have a hint of romance, the drinker of too much coffee (with way too much coconut creamer), and lover of all carbohydrates.

Currently, she lives in Houston, TX with her three boys (yes, her husband is in that count) and three cats. When she isn’t writing about swoony boys or ways for her MC to get into trouble, she is an avid reader, critiquer, (is that even a word?) and trampoline enthusiast.

A.M. Rose is a graduate from San Diego State University with a BA in Communication and a minor in underwater basket weaving. (Okay, maybe not the basket weaving part.)