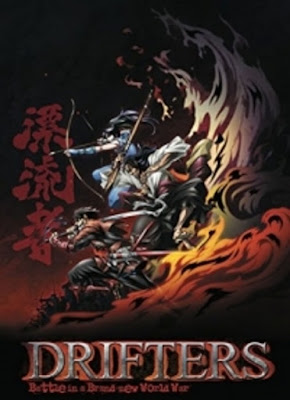 Based on the manga by:
Hirano, Kouta

Plot Summary:
Shimazu Toyohisa, whilst involved at the Battle of Sekigahara, manages to mortally wound Ii Naomasa, but is critically wounded in the process. As he walks from the field broken and bleeding, Toyohisa finds himself transported to a corridor of doors, where a bespectacled man at a desk waits for him. This man, Murasaki, sends Toyohisa into the nearest door where he wakes up in another world. There, Toyohisa meets other great warriors like him who have been transported as well, to be part of a group known as "Drifters".
source

From the creator of Hellsing!!! Drifters: Battle in a Brand-new World War is an anime derived from a manga series by Hirano, Kouta and started serialization in Shōnen Gahosha's magazine, Young King Ours, in 2009. For those (un)familiar with his style, it includes intense, serious tones and plenty of blood shed with thrown in comedy punches at unnecessary times. Drifters uses historical names from all over: Russia, Japan, America, Italy, etc., so brush up on your history or just google everything. This work gives the impression of a dark fantasy anime, as it holds nothing back with inclusions of war, rape, death, poverty, humanity, coup d'etat, and racism (albeit with different species like elves, dwarves, and demi-animals). Yes, it has a "good versus bad" introduction to it but it becomes more complex the more we learn about the Drifter's ideologies and the deaths of the Ends in their previous life.

The opening theme song and overall OST give the impression of an anime that doesn’t take its plot seriously. It’s jazzy and even it’s opening sequence has satirical animation. It only lightly introduces the characters but doesn’t show much about their personality. There was hardly a time where I felt too drawn into the anime because of the music. On the other hand, the animation didn’t miss a beat. Every slice of a sword or axe was accounted for. The ripples of a banner blowing in the wind or the beads of sweat rolling down a soldier’s face complimented the battle scenes perfectly, the only let downs are moments of comedic relief. At that moment in time, I was entranced by the episode only to be hit with flowers, goofy faces, and bright colors. I know it was intentional but please let the characters develop more before throwing that in the audience’s face.

The first few episodes are intense as it starts with a battle scene and introduces us to the main protagonists: Toyohisa Shimazu, a samurai who had died in 1600, Oda Nobunaga a powerful daimyo from 16th century Japan, and Nasu, Yoichi Suketaka from the Genpei war, each of them recruited by the mysterious Murasaki to join other Drifters. Toyohisa Shimazu acts as the fearless military general that can raise armies just by sheer courage alone, Nobunaga acts a brilliant strategist but does not truly understand the “hearts” of his soldiers, and Yoichi being the youngest is lively and fun for someone who can shoot three people (probably more) with one arrow. My beef with Toyohisa as the main character is that he is so dense and focuses on so little but I like his conviction, keep it up. Nobunaga and Yoichi… can stay the same. The other Drifters haven’t been fully introduced to me but all of them have a vibe to them that represents a different ideology. I’m guessing teamwork becomes an important part of this anime.

But what’s a story without conflict? The antagonists are called “the Ends” and are considered insane, abandoned, and work for one purpose. Each of them recruited by E.A.S.Y. and are figures that have been forsaken by their beliefs or died a brutal death, including: Joan of Arc and Anastasia Nikolaevna Romanov. The Ends’s leader is named the “Black King,” we have yet to see his face. So, there’s a lot of speculation with him but “being rejected by humanity” and certain scars may indicate Jesus Christ. Drifters’s plot is so... intriguing (to me at least) and a brilliant way to play with historical figures. It’s like a giant chess game between E.A.S.Y. and Murasaki with an entire world at stake. Season one leaves with a huge cliff hanger as war begins between the Drifters who lead (demi-)humans and the Ends who lead monsters or ogres. My only concern with that is the Drifters, although resilient, are only humans with tools but the Ends practically have “Jesus” who can heal all injuries and the Ends with magical capabilities. Like, “How dis fair?” I’ll just have to see in either the manga or season two.

I love Hirano’s work but that was also the problem with Drifters. It needed an extra push, as I was not the only person in the comments on Crunchyroll alluding to Hellsing. Maybe redesigning characters with different colors would be helpful because apparently, a homosexual version of Comte de Saint Germain wasn’t enough. “Joan of Arc,” the you say? I saw “Zorin Blitz,” from Hellsing, in both physical appearance to personality. “Rasputin,” I think you mean Rip Van Winkle. I think I’ll get over it as the series progresses because the plot escalates so well.
My rating:

Posted by Mariah Bonifacio at 11:44 AM