EXCERPT REVEAL: Fire In You by Jennifer L. Armentrout, writing as J. Lynn

We are ecstatic to share with you this Excerpt Reveal or Jennifer L Armentrout's (writing as J. Lynn) Fire In You, the sixth book in the Wait For You series! Get a sneak peek from the book today!

Some are born with fire in them.

Let the Fire In You burn and preorder your copy today!

Synopsis:
From the # 1 New York Times and International bestselling author, Jennifer L. Armentrout writing as J.Lynn, comes a richly moving story about heartbreak and guilt, second chances and hope. Full of familiar, fan-favorite characters and no two people more deserving of a happy ending, Fire In You will burn bright beyond the last page…Jillian Lima’s whole world was destroyed in a span of a few hours. The same night her childhood love, Brock ‘the Beast’ Mitchell, broke her heart, her life was irrevocably altered by the hand of a stranger with a gun. It takes six years to slowly glue together the shattered pieces of her life, but Jillian is finally ready to stop existing in a past full of pain and regret. She takes a job at her father’s martial arts Academy and she’s going out on her first date since a failed relationship that was more yuck than yum. Jillian is determined to start living.She just never expected Brock to be a part of her life again. But he’s firmly back in her life before she knows it, and not only is he older, he’s impossibly more handsome, more teasing and more everything. And when he sees Jillian, he’s no longer capable of thinking of her as the little girl who was his shadow growing up or the daughter of the man who gave him a second chance at life. He sees the woman who’d always been there for him, the one person who believed in him no matter what.Brock knows she’s the one he should’ve made his, and what begins as a tentative friendship quickly turns to red-hot chemistry that sparks a flame that burns brighter than lust. Falling for Brock again risks more than her heart, because when the past sorrow-filled and guilt-ridden past resurfaces, and a web of lies threatens to rip them apart, the fallout could lay waste to everything they’ve fought to build together, and destroy the dreams of those they care most about.

*Excerpt*
Brock’s gaze flickered over my face and the line of his jaw softened. “It’s been a really long time since you and I have sat and talked to one another. I know you have every reason to hate me. I don’t blame you.”
“I don’t hate you.” That twisting motion in my chest picked up. What I had said was true. Maybe at one point I did. Okay. I’m sure I had, but I’d never been one to hate anyone. It just wasn’t in me. Well, I hated plenty of fictional characters, but some people would claim they didn’t count. I drew in a shallow breath and repeated, “I don’t hate you.”
Brock was still as he stared at me, a flicker of surprise and relief mingling across his chiseled features. “I’m…I’m glad to hear that.”
I pushed all that mess aside and focused. “Why are you even the GM? You’ve probably made enough money to live a very, very long time without having to worry about a paycheck.”
“I have. When I retired from professional fighting two years ago, I could’ve lived quite comfortably for the rest of my life.”
I wanted to ask why he’d retired so young. At his age, he still had a couple of more years left, but I resisted the urge. “So why take this job?”
A frown started to appear. “Do you really need to ask me that?” Before I could respond, he lifted a hand, thrusting his fingers through his hair as he said, “Your father saved my life. That’s not an exaggeration. You know that. If it hadn’t been for him, I would’ve died on those streets. The Academy became my life and it is a part of me. This company is important to me, and even if I’m not fighting, representing the Academy, I still need to be a part of it.”
Lowering my gaze, I squirmed in my chair. Of course I knew that. No matter what had happened, that would’ve never changed for him.
“I love scouting, looking for fresh talent,” he continued. “As the GM, I can still do that. I can give back to your father for everything he did for me. I need to do that. Especially considering how badly I let him down.”
“How in the world did you let my father down?” I asked, genuinely curious. “You’ve won championships for him. Brought so much attention to the—”
"That’s not what I’m talking about.” Tone serious, he held my gaze. “You never told him why you were at Mona’s that night.”
I stilled.
“If you had, he would’ve—”
My eyes snapped to his. “Brock.”
“And I would’ve deserved everything I had coming to me,” he continued, leaning forward. “And the only reason why I never told him you were there because of me was because you made me promise not to.”
Closing my eyes, I pressed my lips together. I had made him promise not to say a word. I’d begged him, because I knew what would happen if he’d been honest. Brock would’ve lost everything.
The knot was back, expanding in my throat. I couldn’t sit here and think and talk about these kinds of things if I was going to be able to make this job work. Curling my hands together, I opened my eyes. “What happened back then has nothing to do with now. It can’t.”
Brock leaned back and straightened.
“And I don’t want to talk about it,” I continued, struggling to keep my voice steady. “We don’t need to talk about any of that for us to work together.”
He was silent for a moment, his body deviously relaxed, but he was like a coiled cobra, and could strike at any moment. “I don’t agree with that, but I’ll let it go.”
Some of the tension seeped out of my shoulders even though I had a feeling there was an unspoken “for now” at the end of what he said. “That’s all, then? I would like to get my office set up and get to work.”
Brock nodded and pushed off the desk. Walking around it, he scanned the paperwork on his desk. “I do believe we have a meeting today with the sales team. Two o’clock.”
“Sounds good.” I rose on oddly shaky legs and turned to the door. Everything felt surreal.
“Jillian.”
Stopping, I faced him. “Yes?”
His shoulders rose with a deep breath as his gaze drifted over my face once more, and I wondered what he thought about how I looked now. “I really want this to work for us, Jillian,” he said, and I felt the very sharp twisting motion in my chest give one powerful stab. “It’s a second chance for us.” 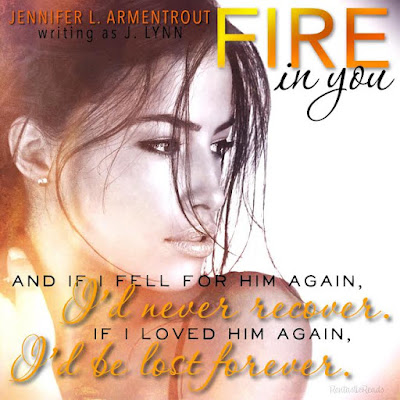 Pre-Order a digital or paperback copy of Fire In You by Jennifer L. Armentrout, writing as J.Lynn, AND fill out THIS FORM, and get an exclusive bonus scene-an Epilogue featuring POVs from all the major couples throughout the Wait For You World!

Fire In You will be available in paperback and eBook November 28th, 2016!

Just enter your name, age, email address, and the order number from your digital or paperback pre-order receipt at https://a.pgtb.me/M7KhMC to receive your exclusive Fire In You bonus scene! All entrants will receive the bonus scene on December 5th, 2016 through email using the email given when the entrant filled out THIS FORM.

Don't miss the previous titles in the Wait For You series! 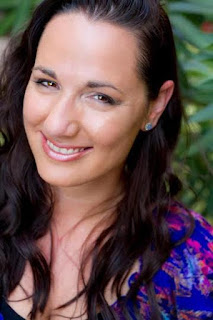 #1 New York Times and #1 International Bestselling author Jennifer L. Armentrout lives in Martinsburg, West Virginia. All the rumors you’ve heard about her state aren’t true. When she’s not hard at work writing. She spends her time reading, watching really bad zombie movies, pretending to write, and hanging out with her husband and her Jack Russell Loki.
Her dreams of becoming an author started in algebra class, where she spent most of her time writing short stories….which explains her dismal grades in math.

Jennifer writes young adult paranormal, science fiction, fantasy, and contemporary romance. She is published with Spencer Hill Press, Entangled Teen and Brazen, Disney/Hyperion and Harlequin Teen. Her book Obsidian has been optioned for a major motion picture and her Covenant series has been optioned for TV. Jennifer has won numerous awards, including the 2013 Reviewers Choice Award for Wait for You, the 2015 Editor’s Pick for Fall With Me, and the 2014/2015 Moerser-Jugendbuch- Jury award for Obsidian. Her young adult romantic suspense novel Don't Look Back was a 2014 nominated Best in Young Adult Fiction by YALSA.

She also writes Adult and New Adult contemporary and paranormal romance under the name J. Lynn. She is published by Entangled Brazen and HarperCollins.