We are thrilled to share with you our stop on this exciting Blog Tour for Nazarea Andrews's Secret Things, the first book in the Hollywood Secrets series! On our stop, we have an excerpt to share! Plus, to celebrate its release, Secret Things ebook is on sale for only $0.99... for a limited time only! 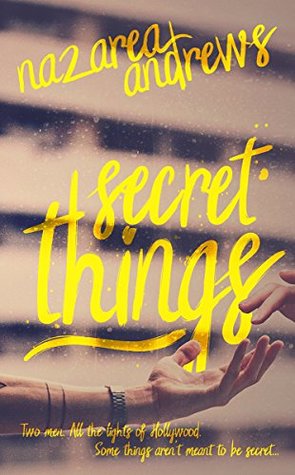 Synopsis:
Camden is on top of the world.

He’s dating his best friend and co-star. He has a top rated TV show that just got renewed for a seventh season. It’s what he’s always wanted.

Dimitri is living the life he always wanted. He and Victor, his high school boyfriend, are social media darlings. His part just got renewed on his hit TV show, and the charity foundation he co-founded is taking off. It’s everything he ever wanted.

The only time either seem happy is when they’re together. And both of them are ignoring the attraction between them. There’s too much at risk. The show, their significant others, a friendship that is more important than a quick screw.

Oh, and Camden is straight.

But attraction isn’t always easy to ignore, and a lot can happen that isn’t meant to. When one of Dimitri’s fans gets involved, both men will have to decide how much and who they want.

My head is still pounding the next morning when I pull up to the curb and Cari crawls out. Her security, arranged by the studio, detaches himself from the baggage claims and makes his way to her as I climb out and circle the rental. “You sure you don't need me to come with you?”
“I'm sure you need to stay with Dimitri,” she says, grinning at me. Her eyes are a little too sharp. “You and him are both off, Cam. Fix this before you get back to set.”
She stares at me, intently, and I nod. “Good. Now kiss me and say goodbye. I've got a plane to catch.”
She tugs me close and hugs me hard.
“Love you,” I whisper in her ear and she flashes me a quick smile as she pulls away, and pulls her rolling suitcase behind her.
“Y’all be good. I’ll see you at home in a week.” She hugs Dimitri and grins at us again, before she heads into the airport, security trailing behind her.
Leaving me with Dimitri. I give him a disgruntled stare. “You look way too fucking chipper for a man who I know is hungover.”
“I don’t believe in hangovers,” Dimitri grins, his eyes bright and utterly amused with me. Bastard. He doesn’t. We’ve spent too many nights drunk, and he is never anything but disgustingly happy in the morning. It’s gross. And wrong.
He actually likes mornings. It’s messed up.
“We meeting the band at the venue?” I ask, easing my way out into traffic, and Dimitri hums under his breath.
I glance at him, and I’m a little startled to see a slightly desolate expression on his face. I’m not used to seeing Dimitri looking sad. “Hey, man,” I say, softly, reaching out and nudging his knee. “What is it?”
“I don’t really want to be trapped on a bus for the next six hours listening to the same ten songs on repeat,” he says, shrugging and I blink at him.
“Okay.”
Dimitri’s head snaps around, and his eyes widen a little. “Okay?”
I nod. “Okay. Where do you wanna go?”