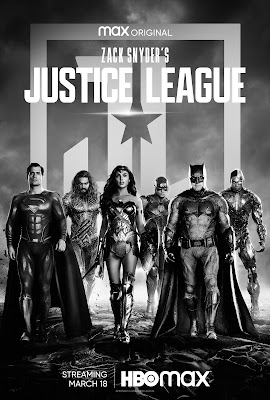 Cast:
Ben Affleck, Gal Gadot, Jason Momoa, Ezra Miller, Ray Fisher, Henry Cavill, Amy Adams, Jeremy Irons, Jesse Eisenberg, Diane Lane
(For full cast and crew on IMDB)
Plot Summary:
Determined to ensure Superman’s sacrifice was not in vain, Batman and Wonder Woman recruit Aquaman, Cyborg, and The Flash to form an unprecedented league of heroes to save the planet from the catastrophic threat of Darkseid, Steppenwolf & DeSaad.
source
~~~~~
*My Thoughts*
Note: This Review contains NO spoilers
So... It has been a few days since watching Zack Snyder's Justice League. And now, after taking a few days to mull over what I had watched, I think I can put my thoughts on this movie down in this review. But, one thing I will not do is compare it to the 2017 Justice League theatrical release.
I really enjoyed this "version" of Justice League. It felt whole. Each of these superheroes stories were told which further built that character development. It just made the story tie and flow together. What I also liked was that this 4 hour 2 minute film was broken into parts or chapters. The break up made for a flow of the storyline that made sense. It was like each "chapter" was telling and setting up for the next. It was visually magnificent masterpiece!
Of course, the length of the film made for a long movie night. At least, we were able to pause for intermission... Haha! But, this was the story that I was waiting for in continuing the story of these superheroes. Be it 4 hours long or 2 hours long, the movie should satisfy viewers/fans. And, I was definitely satisfied with Zack Snyder's Justice League in telling the story for each of them: Cyborg, Flash, Wonder Woman, Batman, and Superman. Oh... Can't forget we got our first look at another soon-to-be Justice League member, too.
It was so worth the wait to get this version out. And, it was so worth the 4 hours 2 minutes. 😁Thank you to all the fans for fighting for this. Thank you to Zack Snyder for completing this and allowing fans to see his vision of the Justice League.
Bottom line... I really enjoyed this amazing and stunning film. So, yeah, I am so fan gushing on this movie. Zack Snyder's Justice League told so much with it's well developed characters and narratives. There is so much more to tell, too. And... This is just the beginning for the Justice League! This was just beautiful! So damn worth the 4 hours 2 minutes of it!
My rating:

Posted by Jasmine Albitos at 11:59 PM