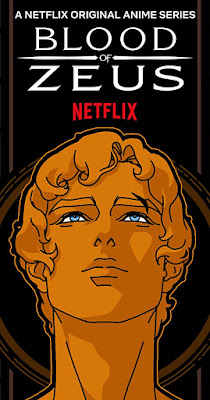 Genre:
Animation/Action/Fantasy
Anime
Series:
Blood of Zeus
Season:
1
Rating:
TV-MA
Episodes:
8
Run Time:
26-38 minutes per episode
Release Year:
2020
Series Directed by:
Shaunt Nigoghossian
Series Writing by:
Charley Parlapanides, Vlas Parlapanides
Plot Summary:
A commoner living in ancient Greece, Heron discovers his true heritage as a son of Zeus, and his purpose: to save the world from a demonic army.
source
Cast:
Derek Phillips, Jason O'Mara, Claudia Christian, Mamie Gummer, Jessica Henwick Elias Toufexis, Chris Diamantopoulos, Adetokumboh M'Cormack, Matthew Mercer, Melina Kanakaredes, Danny Jacobs, Matt Lowe, Adam Croasdell, Jennifer Hale, David Shaughnessy, Fred Tatasciore, Vanessa Marshall
See Full Cast & Crew on IMDB
~~~~~
*My Thoughts*
Blood of Zeus (2020) is an original Netflix animated series. Taking from Greek mythology with gods, titans, giants, and particularly the union between a god and human to create a demigod, Blood of Zeus makes its own demigod in the form of Heron. He is a man raised as a commoner and ostracized by the polis in which he and his mother live. Heron is raised without the knowledge of his true parentage until it is too late. He loses the people that he lived with for years, his beloved mother, and essentially everything he owns. He is then thrown into the role of the hero who must save the world. Along with Heron’s side of the story, Blood of Zeus jumps around from different characters mainly Zeus, Hera, and Seraphim, one of the series’ antagonist. And in that short summary, the Blood of Zeus (2020) does everything right. The protagonist and the main antagonist are revealed with fluid storytelling along with the conflict of the gods and giants. But not only is Seraphim introduced as an antagonist, midway through Blood of Zeus, twists and turns bring Hera in, shining radiantly in all her jealous glory, as another antagonist.
Blood of Zeus had a perfectly executed story, albeit a bit rushed, nice artwork and animation, but it didn’t deliver something new that could get me hooked. With only eight episodes, the series put in every bit of exposition needed to build up to the final fight i.e. a lot of death, a training montage, Seraphim’s struggles that lead him into the man he is during the present storyline, and Heron’s emotional struggles which he overcomes to fight the final fight. There are some unanswered questions by the last episode that make me curious, like the final whereabouts of Hera or if Seraphim drops his pride and rage to save himself from suffering. I am also interested about how Heron will later advance his relationship with his half-siblings Apollo and Hermes, as they seem to be the only two who accept Heron before he became a hero. While I do enjoy Blood of Zeus, I will unfortunately drop it as a three-and-a-half-star worthy watch.
My rating:

Posted by Mariah Bonifacio at 7:17 PM