BLOG TOUR: Lucy Shimmers and the Prince of Peace 2020

Welcome to the Official Blog Tour for Lucy Shimmers and the Prince of Peace (2020). To celebrate the coming DVD release of this holiday film, we have a press release AND a tour-wide giveaway to share! So... Be sure to check it out, watch the trailer, and order your DVD now! 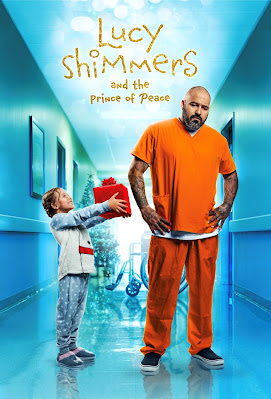 Salt Lake City – Writer, Director and Producer Rob Diamond announced today that his new film, LUCY SHIMMERS & THE PRINCE OF PEACE will be released on Amazon Prime on Black Friday, November 27 and then on Living Scriptures on Friday, December 4.

LUCY SHIMMERS & THE PRINCE OF PEACE is Diamond’s 15th feature film and was produced completely in Utah early in 2020. “I can truly say that this is my favorite film I’ve ever made,” said Diamond. “The inspiration for the film came from a dream I had and then the story and the entire production came together absolutely seamlessly.”

LUCY SHIMMERS tells the story of five-year-old Lucy and the incredible influence she has on those around her, especially hardened criminal Edgar. Lucy, with the help of her guardian angel, create miracles that change his heart and inspire a second chance in his life.

The film features mostly local talent, including Shawn Stevens as Grandpa Jackson, Adam Hightower as James Shimmers, and Florencia Stevens as Isabelle Shimmers. In addition, the film stars well-known actor Vincent Vargas (THE MAYANS) and newcomer Scarlett Diamond in the title-role of Lucy.

Scarlett Diamond just so happens to be the granddaughter of filmmaker Rob Diamond.
“Granted I’m biased, but Scarlett was absolutely incredible. She is only five-years-old and this was her first major speaking role and she proved she’s a natural!” proclaimed Diamond.

In addition to writing, directing and producing, Diamond also operates an acting studio and many of the actors in the film are current and former Diamond students. The film was shot entirely on location in Salt Lake City and Heber, Utah early in 2020. “Our last day of filming was literally the day before Utah shut down in March because of the pandemic,” said Diamond.

~~~~~
***The Giveaway***
Note: Not Responsible for Lost & Damaged Prizes in Your Mail Box
a Rafflecopter giveaway
Posted by Jasmine Albitos at 4:00 AM