MARIAH's THOUGHTS on The Addams Family (2019) 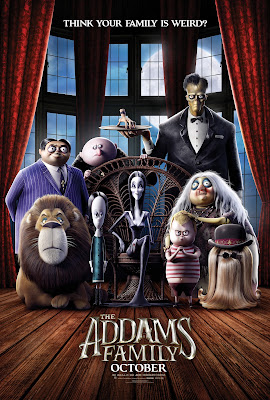 Cast:
Oscar Isaac, Charlize Theron, Chloë Grace Moretz, Finn Wolfhard, Nick Kroll, with Bette Midler, and Allison Janney
(For full cast and crew on IMDB)
Plot Summary:
Get ready to snap your fingers!
The first family of Halloween, the Addams Family, is back on the big screen in the first animated comedy about the kookiest family on the block. Funny, outlandish, and completely iconic, the Addams Family redefines what it means to be a good neighbor.
source
~~~~~
*My Thoughts*
The Addams Family (2019) animated film revels in the kooky and creepy atmosphere originally presented in Charles Addams’ comics, the 1960’s, and 1990’s films, but it adds a modern popular culture twist to incorporate fans from newer generations. The beginning of the film starts with Morticia and Gomez at their wedding night and before the iconic family came together. At the wedding, they have Thing, Grandmama, Uncle Fester, and the rest of the Addams clan, but their happy night is interrupted by an angry mob. Fester, Morticia, Gomez, and Thing escape for a new home, find Lurch who would become their butler, and settle in an abandoned New Jersey asylum. It is a sweet and quick introduction. Now, skip thirteen years later, Wednesday and Pugsley are introduced going through their deadly morning routine including axes, guillotines, and living trees. This is where the film turns from just the Charles Addams’ caricature to another coming-of-age story.
Wednesday is not only iconic with her gloomy atmosphere and murderous attempts on her brother, but she now shows a desire for something new and rebellious. She desires entertainment away from her family. Pugsley is a mischievous and explosions expert going through the expectations of family tradition, perfectly executing the saber mazurka. After the fog and marsh around the old asylum clears away, the town below is revealed. It’s bright and happy appearance is different and strange to the curious Wednesday. While Morticia is skeptical of these new people, the new neighborhood of Assimilation piques Wednesday’s curiosity causing her to enroll in the local junior high. Wednesday chooses to start wearing pink and sparkly clothing. She seemingly assimilates into the neighbor’s lifestyle, much to Morticia’s chagrin. Pugsley, still at home with his family, is stressed because of the upcoming mazurka. Unlike Wednesday, Pugsley tries to embrace the Addams family tradition but still feels stifled. He is unable to be himself and express his passion for demolition. Altogether Gomez and Morticia struggle to raise their children instead of accepting them and their quirks, By the end of the film and after battling a mob of angry citizens from Assimilation, Wednesday and Pugsley learn to wholly be themselves and return to their kooky and death-defying lives.
The Addams Family (2019) enjoys the novelty of its predecessors but turned into a trendy retelling and lost its original allure. The 2019 film makes references to the recent adaptation of IT, inserts pop music, and makes the Addams seem more curious of others than a curiosity themselves. It also makes references from across the Addams Family history with Pugsley collecting road signs and incorporating a dance number like in the 1991 film, but it all felt so cliché when tied together with the pop culture from today. As the Addams family and townspeople learn to coexist with each other and the film includes references every few minutes, but it leaves behind the feeling of kooky and weird that made the Addams family so enjoyable. Nonethe ess, the The Addams Family (2019) film is entertaining and cute.
My rating:

Posted by Mariah Bonifacio at 12:00 AM