MARIAH's THOUGHTS on Weathering With You (2019) 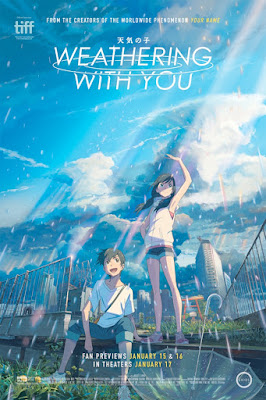 Directed and Written by:
Makoto Shinkai

Plot Synopsis: Tokyo is currently experiencing rain showers that seem to disrupt the usual pace of everyone living there to no end. Amidst this seemingly eternal downpour arrives the runaway high school student Hodaka Morishima, who struggles to financially support himself—ending up with a job at a small-time publisher. At the same time, the orphaned Hina Amano also strives to find work to sustain herself and her younger brother. Both fates intertwine when Hodaka attempts to rescue Hina from shady men, deciding to run away together. Subsequently, Hodaka discovers that Hina has a strange yet astounding power: the ability to call out the sun whenever she prays for it. With Tokyo's unusual weather in mind, Hodaka sees the potential of this ability. He suggests that Hina should become a "sunshine girl"—someone who will clear the sky for people when they need it the most. Things begin looking up for them at first. However, it is common knowledge that power always comes with a hefty price... [Written by MAL Rewrite] source Voice Cast: Kotaro Daigo, Nana Mori, Tsubasa Honda, Sakura Kiryuu, Shun Oguri, Kana Hanazawa, Yuki Kaji, Chieko Baisho

**My Thoughts** Note: This review contains SPOILERS From the same director and studio for Your Name, the viewer is offered another cinematic masterpiece and its name is Weathering with You. Within the first twenty minutes of this film, I was captivated not only by the visuals but the ongoing story. Weathering with You is set in a modern-day Tokyo with endless rain. Although it seems gloomy, the film is amazing at raising emotions of hope and joy and here’s why. It starts with a fourteen-year-old Hina Amano in a hospital room holding her mother’s hand until she sees a patch of sunshine. When she goes to investigate, it is illuminating a small Shinto shrine on top of an old, condemned building. Skip forward one year, the film switches to a sixteen-year-old boy covered in band aids, Hodaka Morishima, who has run away from home to live in Tokyo. From the start, it seems like both characters have a hard life or trouble at home. It isn’t until they find each other and Hodaka encourages Hina to use her prayers to make the sunshine that they begin to live and smile happily.

Of course, a film is not complete without some conflict. Early in the film, the weather maiden foreshadows Hina’s fate. When Hodaka is investigating the “100% sunshine girl,” he encounters a fortune teller that gives him information about Weather Maidens. Hodaka, also earlier in the film, found a gun and becomes a wanted suspect, Hina begins to disappear as a sacrifice for using her sunshine prayers, but before anything else can go downhill, they decide to run away together. Their friends and family get wrapped up in their desire to have a life together, such as Keisuke Suga. After seeing some resemblance to himself in Hodaka, Keisuke saves the boy from getting swept off the side of a ship headed for Tokyo and was the first employer to take in Hodaka. But as the police investigate Hodaka’s whereabouts and question his possession of a gun, Keisuke chooses to kick Hodaka out in favor of saving himself and his relationship with his daughter.

The accumulation of all these character relationships ups the drama, but I can’t possibly forget to mention the visuals of this animated film. The animation is fluid and the artwork otherworldly, no puns intended. There was a heavy emphasis on making the rain and water creatures iridescent. The colorful and transparent creatures played very well in Weathering with You’s attachment to mentions of mythology, but instead of a snow woman we get a rain maiden. Overall, I would say Weathering with You is a beautifully made film with emotional soundtracks to accompany it and a deep romantic storyline. 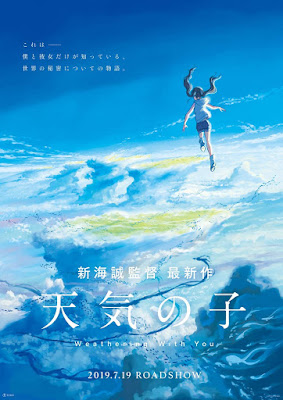 Posted by Mariah Bonifacio at 7:47 PM