MARIAH's THOUGHTS on Ready Player One (2018) 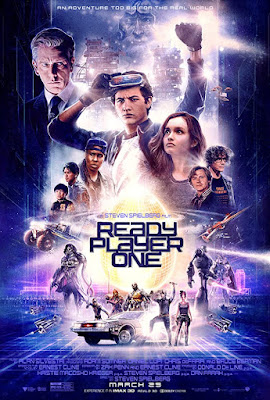 Based on the novel by:
Ernest Cline

Plot Summary:
From filmmaker Steven Spielberg comes the science fiction action adventure “Ready Player One,” based on Ernest Cline’s bestseller of the same name. The film is set in 2045, with the world on the brink of chaos and collapse. But the people have found salvation in the OASIS, an expansive virtual reality universe created by the brilliant and eccentric James Halliday (Mark Rylance). When Halliday dies, he leaves his immense fortune to the first person to find a digital Easter egg he has hidden somewhere in the OASIS, sparking a contest that grips the entire world. When an unlikely young hero named Wade Watts (Tye Sheridan) decides to join the contest, he is hurled into a breakneck, reality-bending treasure hunt through a fantastical universe of mystery, discovery and danger.​
source

Ready Player One was released two years back and I finally got around to writing a review about it. On the surface, it is a fun and action-packed movie that feels like a gamer, geek, or nerd’s fantasy.

The premise is a dystopian world, one where dismal reality can only be escaped through virtual reality, the OASIS short for Ontologically Anthropocentric Sensory Immersive Simulation, co-created by James Halliday and Ogden Morrow. The plot follows a teenage Wade Wattz as he searches the OASIS for the Golden Easter Egg, which is a reward that gives him ownership of this virtual world and a monetary fortune. He is an orphaned boy that ended up living with his aunt and her abusive boyfriend, given this, Wade is a protagonist painted in a sympathetic light and compels the viewer to cheer for him throughout the movie. The main antagonist of Ready Player One is the CEO of IOI or Innovative Online Industries, Nolan Sorrento. He seeks the Golden Easter Egg, much like Wade, but he intends to control the OASIS and subsequently the entire world by adding invasive advertisements which removes the freedom the OASIS offers.

To emphasis the idea of freedom of Ready Player One, the OASIS allows players to customize their character’s appearance and obtain items that originate from all forms of popular culture, such as superheroes, anime characters, video game characters, movie monsters, Hollywood slashers, and more. As an otaku or weeb myself, it has an amazing concept. Underneath it all, however, is a message that heavily relates to today. Although reality can be miserable, being plugged into a different world and subsequently a different life cannot replace the reality that people live in. The movie delivers this message very well with Wade’s victory over Sorrento, IOI, and subsequently ownership rights to the OASIS. Wade then decides to close the OASIS on Tuesdays and Thursdays, he encourages people to spend more time living their real lives; no advertisements, constant entertainment, or customizing their characters.

Overall, Ready Player One seems childish, but I really enjoyed it for the message it sends and all the popular culture references. Ready Player One is a comedy, action, and adventure movie packed into 140 minutes with a sprinkle of romance thrown in.

Posted by Mariah Bonifacio at 2:14 PM