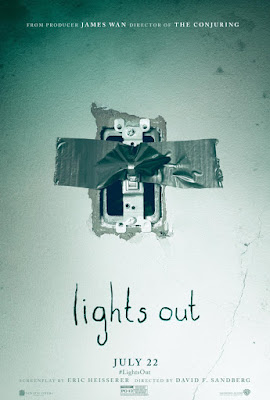 Based on the Short Film by:
David F. Sandberg

Plot Summary:
From producer James Wan (The Conjuring) comes a tale of an unknown terror that lurks in the dark.

When Rebecca left home, she thought she left her childhood fears behind. Growing up, she was never really sure of what was and wasn’t real when the lights went out…and now her little brother, Martin, is experiencing the same unexplained and terrifying events that had once tested her sanity and threatened her safety. A frightening entity with a mysterious attachment to their mother, Sophie, has reemerged. But this time, as Rebecca gets closer to unlocking the truth, there is no denying that all their lives are in danger…once the lights go out.

Lights Out marks the feature film directorial debut of David F. Sandberg, who directed from a screenplay by Eric Heisserer (Final Destination 5), based on Sandberg’s own short film.
source

Lights Out is a supernatural horror that derives from a short film of the same name by David S. Sandberg. The plot of the film focuses on Rebecca Wells and her family as they are terrorized by a shadowy figure. Rebecca appears to be a young adult distanced from her mother, stepfather, and half-brother, due to her mother’s depression. Despite that, Rebecca takes her younger half-brother, Martin, to her apartment when she is informed that their mother, Sophie, is not taking her anti-depressants and after their stepfather is killed. This is when the shadowy figure begins to antagonize Rebecca and her brother to isolate Sophie. The shadowy figure turns out to be Diana, a little girl who had been acquainted with Sophie as a child and eventually manipulated her way into Sophie’s mind.

At first, Lights Out appears to be a simple jump scare movie surrounding a troubled family, but after several viewings it turns out to be much more than that. Lights Out touches upon mental illness through Diana and Sophie’s relationship. It becomes a horror movie that is a metaphor for depression by bringing back the childhood fear of the dark, the only place where Diana can thrive. Even when Sophie tried to move on with her life, only suppressing Diana and pushing her into the back of her mind subsequently denying her issues, it only proves temporary. When Sophie is holed up in her dark house, Sophie tries to handle her depression alone and speaks to Diana pleading for the shadowy woman to let her children be. However, it proves fruitless. Diana works her way into Rebecca and Martin’s lives, attacking and threatening them, even going so far as to attack Rebecca’s boyfriend. Effectively, Sophie lets her depression affect all those around her until she can no longer take it. The movie does end on a rather happy note though. If Sophie had reached out for help sooner, Diana wouldn’t have been such a huge a problem.

And with all this in mind, it’s a clever movie. I find that the characters fleshed out and the pace of the movie steady. The jump scares in the dark only compliment the movies messages of mental health illness and the suspense gets under the viewer’s skin. It is pleasant for someone who enjoys horror movies, but without looking deeper into the meaning behind it, Lights Out seems to be a bore.

Posted by Mariah Bonifacio at 1:52 PM