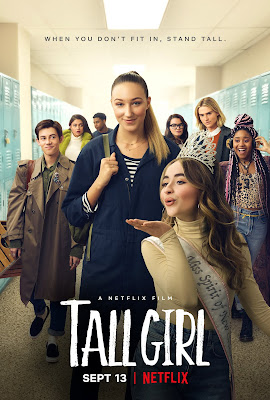 Plot Synopsis:
After years of slouching through life, 6-foot-1 teen Jodi resolves to conquer her insecurities and gets caught up in a high school love triangle.
source

Tall Girl is a quaint Netflix original movie starring Ava Michelle as Jodi Kreyman the six feet one-inch tall girl in the school. The movie has all the right elements to get the message through, “teenagers will have insecurities and body issues” or “to get comfortable in your own skin.” Jodi is teased and mocked for being the tallest girl in her school with frequent “How’s the weather up there” jokes. She can’t seem to find the right sized clothes and gives up piano because she feels like it brings too much attention to herself. Jodi has a sister who dominates teenage beauty pageants and Kimmy Stitcher, Jodi’s bully, played by Clara Wilsey, who goes out of her way to make Jodi feel like an outcast. When a new, taller than six feet one-inch, foreign exchange student arrives at Jodi’s school, she swoons like every other girl and the plot of the movie begins to thicken. Jodi decides to change herself to gain his affection but instead overcomes her insecurities to finally accept herself.

Since Tall Girl is a high school drama about self-love, it can be highly cliché. The supporting cast and background actors try too hard to make it seem like Jodi is an alien for her height, making their speech seem forced and insincere. Many of the support characters also seem flat, like Kimmy who has no other purpose than to be a nuisance to Jodi or Jack Dunkleman, played by Griffin Gluck, who is Jodi’s goofy close friend and not-so-secret admirer. However, Stig Mohlin the new exchange student, played by Luke Eisner, is portrayed quite nicely as the new boy lost in a foreign school. He makes mistakes to be a part of the popular crowd in school with Kimmy, but secretly has feelings for Jodi, thus striking up a love triangle.

What made Tall Girl extra cliché is the love triangle between Stig, Jodi, and Jack. It was sweet that the movie ended on a positive note where Jodi and Jack become a couple, Stig and Kimmy are stuck with each other, and Jodi finally accepts that her height is a part of her. While it is simply a nice movie, especially for the viewers who also experience alienation for their height, Tall Girl is nothing extraordinary as a movie. It had all the right elements but nothing to make me gush in adoration or disgust.

Posted by Mariah Bonifacio at 6:13 PM