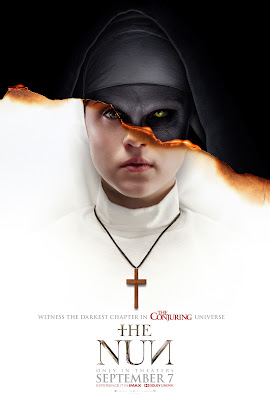 Plot Summary:
When a young nun at a cloistered abbey in Romania takes her own life, a priest with a haunted past and a novitiate on the threshold of her final vows are sent by the Vatican to investigate. Together they uncover the order’s unholy secret. Risking not only their lives but their faith and their very souls, they confront a malevolent force in the form of a nun, as the abbey becomes a horrific battleground between the living and the damned.
source

Note: This review contains SPOILERS
The Nun was supposed to be the darkest film of the Conjuring universe and a tool to introduce the demon Valak’s backstory, but the only thing that was really dark throughout the movie was the poor lighting to emphasize the creepiness of the old abbey. Since the demon had been revealed in past movies and appeared in the first ten minutes of The Nun, the suspense and fear had already been lost. The story had an independent plot from the other Conjuring movies with its only connection to the others being Maurice "Frenchie" Theriault, the man who escorted Father Burke and Sister Irene to the abbey. The Nun was set in 1952 where a Roman Catholic priest and a novice nun, Father Burke and Sister Irene, were sent to an abandoned abbey in Romania. They subsequently battle the malevolent Valak and the viewer ended up learning about how Valak possesses Maurice to travel from Romania into the first Conjuring film. It was a small connection and I found that it didn’t have a lot of leverage. In reality, The Nun should be a movie meant to flaunt Valak’s powers. In past movies of the Conjuring universe, Valak had already been shown to possess others, enter dreams, and have forms of telekinesis. And later in the The Nun, he seems to have the ability to create illusions such as the nuns that interact with Sister Irene, physically strangle and maim his victims, or even warp reality such as when he buries the Father Burke in a grave. Given everything that Valak could do, the movie relied heavily on him to produce jump scares. The only redeeming qualities to The Nun would have to be the casting. I enjoyed the movie solely for Taissa Farmiga, Demián Bichir, and Jonas Bloquet’s performances and character interactions. Sister Irene became the determined and faithful nun, Father Burke dealt with his own past demons to overcome Valak, and Maurice intervened with humorous remarks or ominous warnings. But for most of the movie, they were separated from each other until the end, where they decided to seal Valak into the rift he came from. When you watch something twice and still decide to do something else both times while watching, The Nun certainly leaves much to be desired as a horror film

Posted by Mariah Bonifacio at 3:45 PM