Welcome to the Official Blog Tour for Jodie Lynn Zdrok's Spectacle!!! Today, on our tour stop, we are closing this tour with an exclusive excerpt AND a review! Find out what I thought about this thrilling read! We even have a tour-wide giveaway to share, too! So... Check it out and grab your copy now!!! Follow the tour, HERE!!! 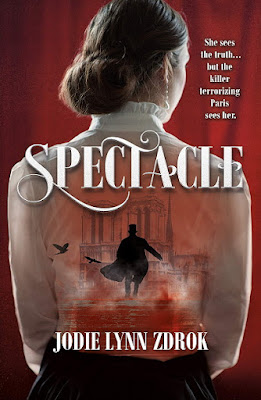 Synopsis:
A YA murder mystery in which a young reporter must use her supernatural visions to help track down a killer targeting the young women of Paris.

Sixteen-year-old Nathalie Baudin writes the daily morgue column for Le Petit Journal. Her job is to summarize each day's new arrivals, a task she finds both fascinating and routine. That is, until the day she has a vision of the newest body, a young woman, being murdered--from the perspective of the murderer himself.

When the body of another woman is retrieved from the Seine days later, Paris begins to buzz with rumors that this victim may not be the last. Nathalie's search for answers sends her down a long, twisty road involving her mentally ill aunt, a brilliant but deluded scientist, and eventually into the Parisian Catacombs. As the killer continues to haunt the streets of Paris, it becomes clear that Nathalie's strange new ability may make her the only one who can discover the killer's identity--and she'll have to do it before she becomes a target herself.

Nathalie darted across Quai Saint-Michel, breathless after a close call with a horse-drawn carriage, and crossed the bridge leading to the Île de la Cité. She made her way toward Notre-Dame, which stood directly in front of the morgue, and took in its grandeur against the cloudless blue sky. She’d seen the medieval cathedral hundreds of times yet remained in awe of those majestic towers. When she was young she’d named some of the gargoyles on the very top, above the band of statues, and still greeted them whenever she passed by. Out of habit she looked up at Abelard, Tristan, and Bruno. Abelard leaned forward and shook his head at her disapprovingly.
No. It’s not real. You’re still seeing things.
She turned her attention to her article, reviewing it as she walked. She paused beside the bronze statue of Charlemagne on horseback.
She’d had to remove herself from the dream, or vision, or whatever it was, in order to clear her thoughts well enough to write the piece. Words typically danced from her pencil; today they’d tiptoed across the paper.
End each article big, M. Patenaude advised on her first day. So big they can’t wait to buy the paper the following day to read your next column.
After listing the corpses that remained from the previous day and the addition of the body of the sunburned man, Nathalie hesitated. She wasn’t accustomed to providing such gruesome details, but she knew M. Patenaude would want an elaborate description.

The most noteworthy corpse of all was that of a young woman pulled from the Seine, a murder victim. Her youthful features, sliced into horrible distortion, betrayed no sign of the terror she suffered before her untimely death at the hands of what can only have been a cold, disturbed soul.

That was it. Two summary sentences. Leaving so much unsaid. Presenting it as if she hadn’t somehow witnessed the murder taking place. Reporting it in a detached voice, as if it didn’t unsettle her down to her bones. Someone else wrote that column.
Or so it felt. Or so everything felt since she’d touched that glass. In her body but not. In her head but not.
She read the final sentence one more time and started walking again.

"Clever and full of murder, Jodie Lynn Zdrok's Spectacle had my eyes glued to the pages as the body count rose, and mystery stacked upon mystery as our heroine closed in on a killer who seemed miles ahead of the Parisian authorities. Fans of serial killers and criminal investigations will find much to love, and fascinating passages about morgue tours will appeal to the morbid rubbernecker in us all." ―Kendare Blake, #1 New York Times bestselling author of the Three Dark Crowns series

“With a fierce heroine, grisly 19th-century murders, and a mystery that left me on the edge of my seat, Spectacle is an immersive, Parisian, YA From Hell that I absolutely devoured!" ―Gretchen McNeil, author of Ten and #MurderTrending

"Zdrok explores the universal fascination with death, set among the darker corners of 1887 Paris, and the very idea of the morgue viewings (to which parents brought their children) is chilling...Grisly, plot driven―and very creepy. Fans of historical thrillers that invoke the enduring spirit of Jack the Ripper will have fun." ―Kirkus Reviews

“Hints of the murderer’s identity are subtly and intriguingly folded into the story, and unresolved plot threads pave the way for future cases, during which Nathalie can discover more about her powers. The blend of history, mystery, and fantasy makes this debut novel a good pick for fans of Libba Bray’s Diviners series or William Ritter’s Jackaby books." ―Booklist

“The book seamlessly brings several threads together: the mystery of the murder and the horrors of the killings themselves; the beauty, bustle, and darkness of nineteenth-century Paris (the killer’s pursuit of Nathalie through the catacombs is thrillingly described); the bizarre but historically based practices of morgue viewing and blood transfusions for magic; and the destructive nature of family secrets and their generational effects. ...the tension amps up to a gasp-worthy climax.” ―Bulletin of the Center for Children's Books

“Zdrok has concocted an ambitious Victorian-era story. ...Intricately plotted, the story's pace burns slow before racing ahead to set up and topple assumptions about the true identity of the Dark Artist.” ―School Library Journal  ―Publishers Weekly

**About the Author**
Jodie Lynn Zdrok holds two MAs in European History (Providence College, Brown University) and an MBA (Clark University). In addition to being an author, she’s a marketing professional, a freelancer, and an unapologetic Boston sports fan. She enjoys traveling, being a foodie, doing sprint triathlons, and enabling cats. She is represented by Ginger Clark of Curtis Brown, Ltd.

Spectacle is a riveting mystery, where the main character Nathalie Baudin is brave, fierce, and compassionate. Although she wants to reject her visions of the murders happening in Paris, she takes matters into her own hands at the risk of her own safety. In the beginning, Spectacle launches its reader into Nathalie’s life as a morgue reporter and immediately introduces us to her visions, wherein she sees the murder from the killer’s point of view, but in reverse. This not only starts the story but forces the reader to find intrigue as to what is happening. The start of the story has Nathalie walk to the morgue, where corpses are put onto display for the public, along the way she buys a small bouquet of flowers. To the reader, this seems like she is simply mourning and respecting the dead with a common offering, but this small detail helps unlock the beginning of Nathalie’s murder mystery.

From her job with Le Petit Journal, her conversations with her mentally ill aunt, her friends, Simone, Agnès, and her employer Monsieur Patenaude, every detail to Nathalie’s life adds onto the suspense of Spectacle. There are many layers to Spectacle that makes Nathalie’s life richer and the story dangerously dynamic and given the historical aspects of 1887, death is all around. From her morgue journal, her visions, the murders, Nathalie uncovers secrets about her family and who the killer is. The only downside to Spectacle is that the story may be slow as Nathalie processes the events that connect her to the murders and handles her relationships with her loved ones. Jodie Lynn Zdrok weaves a delicate mystery that leaves me stunned at every turn. Overall, while reading, it kept me on edge and wonder who the killer would be. 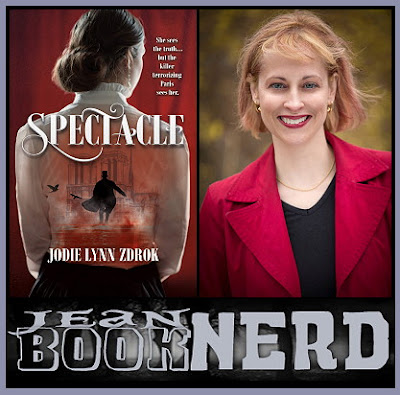