Welcome to the Official Blog Tour for Genevieve Iseult Eldredge's Ouroboros, the second book in the Curcuit Fae series! We are thrilled to kick off this tour with a sneak peek excerpt!!! So... Check out the tour festivities and grab your copy now!!! Don't forget to follow the tour, HERE!!! 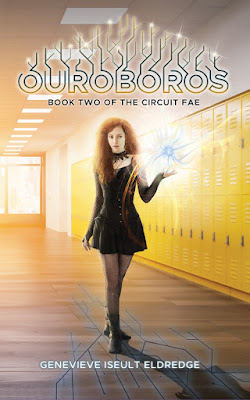 Synopsis:
All introverted geek girl Syl Skye wants is to get close to her girlfriend. But when you can kill with a simple touch, a normal date night’s not really in the cards. As it happens, Syl is also a sleeper-princess of the fair Fae. Last year after a freak accident, her power Awakened, granting her white flame to purify the darkness.Rouen Rivoche is that darkness—a dark Fae princess whose power to bewitch mortals is as terrifying as the violet lightning she controls. Rouen is Syl’s total opposite. Her mortal enemy.She’s also Syl’s beloved girlfriend.And even though they joined forces to defeat the evil Circuit Fae who harnessed the killing magic in technology to take over the school…that was so last year.Now, Syl’s touch could mean Rouen’s death. Her increasing power is spiraling out of control, threatening to burn down everything she and Rouen have built together.Their lives, their love, their very world.

*Excerpt*
In this scene from Syl’s POV, she and Rouen are running from the villainess Fiann’s Wild Hunt, a group of gargoyle-hounds called Môrgrim.


I slow my speed and check behind me. No Môrgrim. The baying’s stopped.
I turn toward Euphoria. “Whew! Looks like we lost them!”
“Syl!”
A huge gargoyle smashes into my chest with the force of a Mack truck. Bam! The wind goes out of me with an embarrassing oof! And I’m tumbling tuckus over teakettle with a thousand pounds of angry, burning Môrgrim on my chest.
Everything is crushing weight and green fire and smog as I wrestle with it.
“Ugh.” I grab its muzzle. “Brush. Your. Teeth.” Every word is punctuated with a punch of my fist. I can hear Euphoria shouting my name. I turn my head to the side to avoid its snapping jaws.
A chorus of howling sends shivers down my spine.
Crap. We’ve been ambushed.
Dark forms surround Euphoria. The Môrgrim snaps at me again, froth flying in my face. I’m slowly choking, green electricity snapping and zapping around me.
I’m about to become a crispy critter. No choice.
“Bad gargoyle!” I call my flames to my hands, bright and burning white, edged in the torc’s shadow.
And, oh, how the tables turn.
The Môrgrim decides he wants exactly zero to do with me. While he’s pondering the finer points of being on fire, I kick him off. He howls, goes skittering into his pals—a wall of bristling, growling black.
Euphoria windwarps over next to me.
“Seriously?” I give her the stink-eye. “When are you going to teach me that?”
“When you’re able to learn, young Padawan.”
“That’s it.” I scramble to my feet, ready to fight. “No more Star Wars.”
Euphoria goes back-to-back with me. “Anger leads to the Dark Side.”
“Gah!”
But the Môrgrim back off.
Before we can start celebrating, though, E points, a grim look darkening her face.
Sure enough, the two jerkiest jerks in the world are coming up on us fast. Aldebaran keeps pace easily with Fiann, his golden-boy looks totally at odds with the Evil Queen look Fiann’s trying, unsuccessfully, to rock.
Although…I’ve gotta admit, her special effects are on point.
Ginormous black wings unfurl from her back, like a cross between bat wings and dragon wings, all glittering with circuitry. More dark circuits make up her cloak and black body armor.
She’s flying.
“Hey.” I look at Euphoria. “You don’t have wings.”
“Of course not.” She keeps one eye on the villains and another on the Môrgrim. “I’m not a Circuit Fae.”
“Looks like these two losers have teamed up,” I say, hands on my hips. It figures. They couldn’t get at us separately, so they’ve joined forces. “Why are bad guys always so predictable?”
“I think it’s in their contract,” E deadpans. 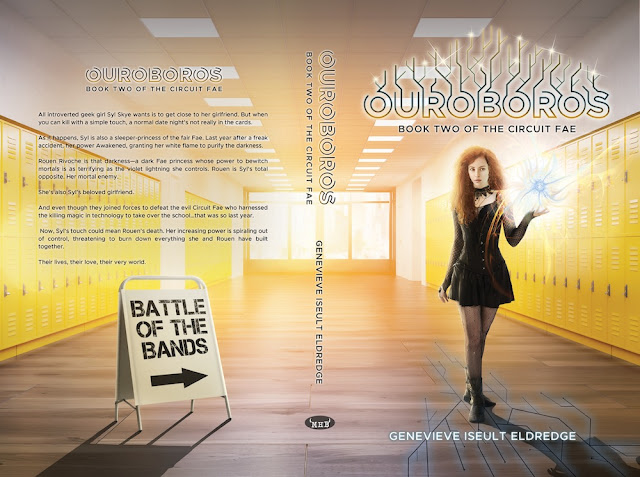 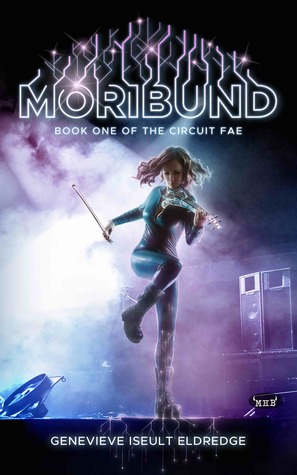 Get the first three chapters of Genevieve Iseult Eldredges's Moribund FREE, and get a glimpse into the world of the Circuit Fae! 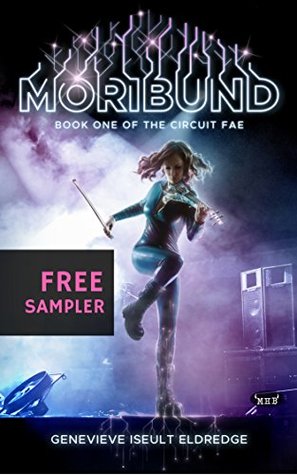 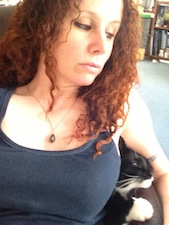 Raised by witches and dragons in the northern wilds, Genevieve Isleut Eldredge (GIE) writes angsty urban fantasy YA romance--where girls who are mortal enemies kick butt, take names, and fall in love against all odds.

She enjoys long hikes in the woods (where better to find the fair folk?), believing in fairies (in fact, she's clapping right now), dancing with dark elves (always wear your best shoes), being a self-rescuing princess (hello, black belt!), and writing diverse books about teenage girls finding love, romance, and their own inner power.

She might be planning high tea at the Fae Court right now.

GIE is multi-published, and in her role as an editor has helped hundreds of authors make their dream of being published a reality.