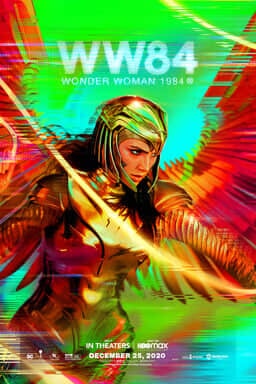 Cast:
Gal Gadot, Chris Pine, Kristen Wiig, Pedro Pascal, Connie Nielson, Robin Wright
(For full cast and crew on IMDB)
Plot Summary:
Fast forward to the 1980s as Wonder Woman’s next big screen adventure finds her facing two all-new foes: Max Lord and The Cheetah.
source
~~~~~
*My Thoughts*
“The 80’s never dies,” is what I would like to say.
Wonder Woman 1984 is an action, adventure movie based upon the poplar DC comics character, Diana Prince. This movie is phenomenal in which it contains multiple character inner conflicts that tie together. It didn’t feel like a traditional or linear story line. To start, a glimpse of Diana Prince’s childhood is played in the form of an athletic competition. Here Diana is taught a lesson about truth and sincerity. Skip ahead and Diana lives a normal life. She lives in solitude until she meets coworker Dr. Barbara Minerva, a rather awkward but warm and friendly woman. Through her, the movie begins to build suspense when Maxwell "Max Lord" Lorenzano decides to enter their workplace at the Smithsonian and become friendly with Dr. Minerva. He steals the Dreamstone which connects these three characters and acts as the catalyst of the movie. It is a gift from the gods that grants the holder any one wish, but like every tale in mythology and lore, all magic comes with a price.
Wonder Woman 1984 packs a lot of information into its one hundred and one-minute run time. Each of the three aforementioned characters wishes for something deeply rooted in their insecurities and pasts; three simple wishes turn into a worldwide catastrophe. Diana, who is still grieving the loss of Steve Trevor, wishes for more time with him. Dr. Minerva wishes to feel less inadequate and to be more amazing, to be special. Which brings us down to Max Lord who is a rather predictable con artist and antagonist. Throw in the dream of becoming important and respectable, these three wishes create a domino effect that involves the wish of every person on the planet. Even with these different stories playing together, they can be intertwined into one final showdown.
The fallacy of WW84 would have to be that the deuteragonists, also antagonists, seem shallow. They don’t hold a candle to their comic book counterparts. A younger Max Lord came from an abusive father, poverty, and he was often bullied for it; hence, his desire for riches and greatness. Barbara is intelligent and sweet but desires more strength and beauty. She is timid and cannot even garner the attention of her male coworkers but will get the attention of a drunkard in the middle of the night. In the end, they are defeated and their loss leaves much to be desired. Max and Dr. Minerva are skimmed over, like they won’t be seen again.
WW84 is also an interesting movie because of the subtle messages it places into the plot. Dr. Minerva and Max represents feelings of self-consciousness and loathing, the desire to take the easy way out of a difficult situation. Diana represents a knowledgeable, courageous, but not infallible woman that anyone can aspire to become. She is a creation of Zeus and raised to be a warrior, but she is still susceptible to grief and loneliness and it shows. Her wish costs her godly powers, diminishing her strength throughout the movie until she realizes that she needs to let go and the lesson her aunt Antiope had taught her years ago comes circling back. Truth and sincerity play a major role in the climax and final fight. The world’s people may wish for something that they desire, but everyone simply can’t get what they want without causing more pain and chaos. Diana brings this lesson from her past into the present and teaches it to the world. How she does it exactly should be left for the viewer to find out.
My rating:

Posted by Mariah Bonifacio at 8:41 AM