MARIAH's THOUGHTS on My Next Life as a Villainess: All Routes Lead to Doom! Season 1 (2020) 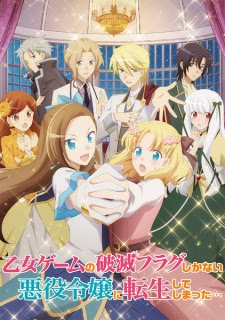 Based on the light novel written and illustrated by:
Satoru Yamaguchi and Nami Hidaka

Plot Synopsis:
Most people would prefer being the protagonist of a world full of adventure, be it in a game or in another world. But, unfortunately, a certain girl is not so lucky. Regaining the memories of her past life, she realizes that she was reborn in the world of Fortune Lover—one of the games she used to play.
Unfortunately, the character she was reincarnated into—Katarina Claes—is the game's main antagonist, who faces utter doom in every ending. Using her extensive knowledge of the game, she takes it upon herself to escape from the chains of this accursed destiny.
However, this will not be an easy feat, especially since she needs to be cautious as to not set off death flags that may speed up the impending doom she is trying to avoid. Even so, to make a change that will affect the lives of everyone around her, she strives—not as the heroine—but as the villainess.
source

My Next Life as a Villainess: All Routes Lead to Doom! is an isekai anime with nothing but light-hearted moments and enjoyable content. The main character, Katarina Claes, is a young girl with vivacity, determination, and almost carefree childishness. She aims to change her fate from a bad end to a slightly less bad end. Considering she is reborn as the antagonist of an otome game, Fortune Lover, her actions are understandable. Given this, the anime doesn’t limit Katarina’s choices like a real otome game. She has the freedom to make her own route, make her own choices, and subsequently, make her own ending. But like an otome game, this anime describes the leading male roles by describing their overall personalities in quick succession and their relationship to the main character, such as Gerald Stuart who is Katarina Claes’s fiancée. He is described as secretly terrible on the inside but also a genius at anything. Diving deeper, Katarina detours from the mean girl role she was reincarnated into and essentially turns this new world of hers into a reverse harem. To do so, she chooses to be kind, generous, and inclusive of the game’s characters regardless of their original roles and she eventually wins over their hearts. It is because of her attitude and character that the others break their own molds that the game has set for them. Each character and their deepening relationship to Katarina helps piece this short anime series together into enjoyable content.
My rating:

Posted by Mariah Bonifacio at 2:43 AM