Surprise!!! We are excited to share this surprise announcement!!! Yup! We have a Release Day announcement and Cover Reveal for Kristen Proby's Easy Fortune, a Boudreaux series novella! This is a standalone second chance romance featuring Mallory's best friend Lena! Don't miss the beautiful cover and a note from Kristen below! Check it out and pre-order your copy today! 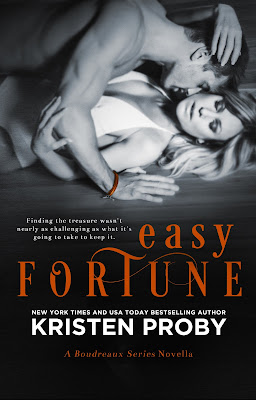 Synopsis:
Sometimes the past is better left behind you…

Lena Turner has spent her life as the outsider. Thanks to her extraordinary gifts, she’s learned to be independent—especially when it comes to men. She’s content to live her life in New Orleans as a schoolteacher, dating casually and dedicated to her small family. Long term is not part of her plan.

Sometimes the past catches up with you…

Leaving Lena behind to pursue his career was the most difficult thing Mason Coulter ever did. He told himself that it was for the best, had even convinced himself that he had only Lena’s best interests in mind. But now, after six long years, he’s back in New Orleans to settle his late eccentric aunt’s estate. All he has to do is get in and out of the city without submitting to the need to see Lena. But to Mason’s dismay, his aunt made other plans.

And sometimes the future and the past collide…

Having Mason walk back into her life is something Lena never saw coming. She could refuse to help him, but she’s never been good at telling Mason no. So she’ll do what she can to get the estate settled and Mason out of her life for good.

At least, that’s the plan. But Mason has plans of his own…

A Note from Kristen:
Hi, everyone! I’m so happy that it’s finally Friday because that means that I don’t have to keep this secret anymore! I’m horrible at keeping secrets. Seriously, don’t tell me any. I can’t be trusted.

Since Easy Magic released last month, readers have shouted from the rooftops that they’d love for Lena, Mallory’s BFF, to have her own story. I honestly didn’t have that in mind when I wrote her into Easy Magic, but the more I thought about it, the more it occurred to me that you’re right. Lena does deserve her own happily ever after!

And that brings us to this. Easy Fortune, Lena’s story, will release on May 30th! That’s right, you won’t have to wait long for this one. Easy Fortune is a novella, and can be read as a stand-alone. And look at this gorgeous cover! I can’t thank Sara Eirew Photography enough for the beautiful photo, and Okay Creations for the amazing cover art.

Lena’s story has been a surprise to me, and frankly one of the most enjoyable story lines that I’ve written in a long time. I hope you enjoy watching her fall in love with Mason! He’s quite swoon-worthy!

Oh, and to make it an even better treat, the prologue and first chapter for Easy Nights will be included at the end of Easy Fortune. JACKPOT! ☺

Have a great weekend, everyone!

Don't miss the first standalone titles and novellas in the sexy and intriguing Boudreaux series!