Welcome to the official Blog Tour for Michael F. Haspil's debut novel, Graveyard Shift!!! This tour will consist of various posts, well, mostly reviews. Anyways, on our tour stop today, we will post a review. Plus, we have a tour-wide giveaway, too! So... Check it out and grab your copy today! Follow the tour, HERE! 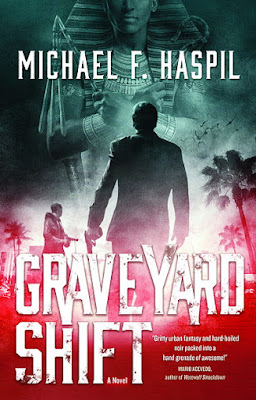 Synopsis:
Police procedurals go supernatural in this gritty urban fantasy debut Alex Menkaure, former pharaoh and mummy, and his vampire partner, Marcus, who was born in ancient Rome, once hunted evil vampires for UMBRA, a super-secret unit of the NSA. That was before the discovery of a blood substitute and a Supreme Court ruling allowed thousands of vampires to integrate into society.Now, Alex and Marcus are vice cops in a special police unit. They fight to keep the streets safe from criminal vampires, shape-shifters, blood-dealers, and anti-vampire vigilantes.When someone starts poisoning the artificial blood, race relations between vampires and humans deteriorate to the brink of anarchy. While the city threatens to tear itself apart, Alex and Marcus must form an unnatural alliance with a vigilante gang and a shape-shifter woman in a desperate battle against an ancient vampire conspiracy.If they succeed, they'll be pariahs, hunted by everyone. If they fail, the result will be a race-war bloodier than any the world has ever seen.

“Those who enjoy police action mixed with urban fantasy may want to try this series launch.”—Library Journal, starred review

“The buddy-cop formula gets an undead twist with Alex—also known as the pharaoh Menkaure, reanimated to carry out an eternal duty—and Marcus, his vampiric colleague, who serve as cops in a special paranormal unit. Between the two of them, they have several thousand years' worth of superpowersand martial aptitude. The action is gritty, cinematic, and unrelenting...the worldbuilding is intriguing (as a figure drawn from Egyptian mythos, Alex injects fresh blood into undead tropes), and the reader runs no chance of growing bored during the tense race to the finish, in which a confrontation with an old enemy lays the groundwork for a potential sequel. Fans of urban fantasy, noir, and tightly choreographed action scenes will enjoy the blood and bullets in this adrenaline-heavy ride through crime scenes and secret societies.”—Kirkus Reviews

“Inventive and cleverly crafted with a unique premise, Haspil's urban fantasy is absolutely gripping. With strong, intelligent storytelling, distinctive, vivid characters, and gritty, edgy dialogue, Haspil will capture readers. Alex is a compelling, powerful hero and Marcus, his partner, is astrong and enthralling counterpart. With an intricate plot filled with actionand intrigue, Haspil lends a fresh voice to urban fantasy with his exciting and riveting debut.”—RT Book Reviews, four stars

**About the Author**
Michael F. Haspil is a geeky engineer and nerdy artist. A veteran of the U.S. Air Force, he had the opportunities to serve as an ICBM crew commander and as a launch director at Cape Canaveral. The art of storytelling called to him from a young age and he has plied his craft over many years and through diverse media. He has written original stories for as long as he can remember and has dabbled in many genres. However, Science Fiction, Fantasy, and Horror have whispered directly to his soul.

When he isn’t writing, you can find him sharing stories with his role-playing group, cosplaying, computer gaming, or collecting and creating replica movie props. Lately, he devotes the bulk of his hobby time to assembling and painting miniatures for his tabletop wargaming addiction. Michael is represented by Sara Megibow of the KT Literary Agency and Adrian Garcia of the Paradigm Talent Agency.

He has collected and made replica movie props for over twenty years and enjoys the way a particular collectible lets an individual connect with a meaningful story.

He spends entirely too much time gaming or thinking (some might say ‘scheming’) about strategies and tactics in all kinds of gaming be it board games, computer games, or his passion, tabletop wargaming. He devotes the largest share of the gaming pie to Games Workshop’s Warhammer 40,000 tabletop game. He has collected and played Grey Knights, Space Marines, Tyranids, Dark Eldar, Necrons, and Space Wolves. Michael is a regular contributor to “The Long War” a premiere podcast and webcast dedicated to tabletop gaming, but especially to Warhammer 40,000.

So... This was definitely a read that I got into! I was intrigued by the synopsis, especially it covered much of the paranormal/supernatural lore that I enjoy reading. The story is written in a police procedural style with the main characters as vice cops dealing with supernatural beings while solving/fighting crime. Kinda reminded me of Lethal Weapon, but, obviously, with a supernatural twist. This also gave me a Grimm-ish feel to it; however, Graveyard Shift was darker and grittier. Moreover, Michael F. Haspil made it work with this debut novel of his.

The character development and world-building had a lot of depth and substance with all the descriptive writing. The book is told in the point of view (POV) of Alex and Marcus; however, there are also other characters' point of views told which connects to each other that is relevant to the storyline. At least, the various POVs are mostly separated by chapters that way it doesn't get too confusing. Well, if you don't pay attention, details and clues can be missed. So, yeah, there's a lot of twists to this case that Alex and Marcus is working on.

I would have to say that the highlight(s) of this book is the incredible description of characters and setting; the consistency of story flow; the twists and turns that kept me guessing; and the action-packed scenes. However, the only thing that I could find is that the read slow to start, and the varying character POVs could be distracting. But, then again, those POVs are important in solving this mystery, especially when each of these POV is connected to each other one way or another. Well, other than that, I enjoyed this mystery. I can even see this turning into a whole series of Alex and Marcus' exploits as vice cops in Miami!

Graveyard Shift is a gritty and dark police procedural with a supernatural twist that drags readers into the crime underworld they live in. 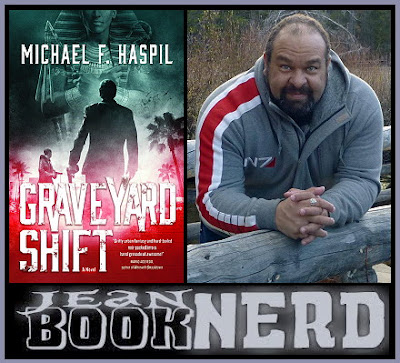 Giveaway Open Internationally | Must Be 13+ to Enter