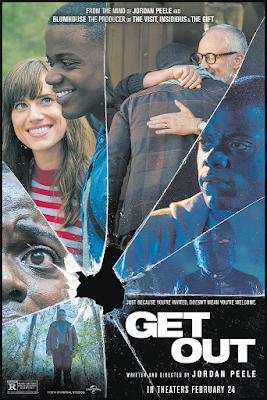 Synopsis:
In Universal Pictures' Get Out, a speculative thriller from Blumhouse (producers of The Visit, Insidious series and The Gift) and the mind of Jordan Peele, when a young African-American man visits his white girlfriend's family estate, he becomes ensnared in a more sinister real reason for the invitation.

Now that Chris (Daniel Kaluuya, Sicario) and his girlfriend, Rose (Allison Williams, Girls), have reached the meet-the-parents milestone of dating, she invites him for a weekend getaway upstate with Missy (Catherine Keener, Captain Philips) and Dean (Bradley Whitford, The Cabin in the Woods).

At first, Chris reads the family's overly accommodating behavior as nervous attempts to deal with their daughter's interracial relationship, but as the weekend progresses, a series of increasingly disturbing discoveries lead him to a truth that he could have never imagined. 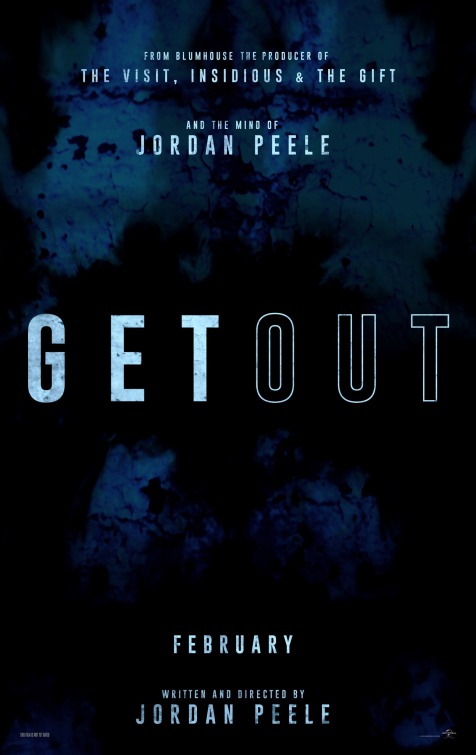 …So, the trailer practically gave it all away…
As good as my classmates and Rotten Tomatoes claim it to be, I can’t bring myself to give Get Out more than 3 & ½ stars. Don’t get me wrong; it was a nice little thriller in the middle of the day, but I just wasn’t impressed. I take one full star out because of “jump scares;” they are overdone. If this film was on mute, jump scares wouldn’t even happen.

The acting and the screenplay in Get Out were a believable display of stress, deception, and fear. I particularly enjoyed the stage chemistry between Daniel Kaluuya and Allison Williams, playing Chris Washington and Rose Armitage, respectfully. They played an interracial couple that made me kind of jealous. On the subject of acting, the extra members of the cast interested me because they acted well as pawns in the antagonist’s plans but at some point, they were robotic. It honestly didn’t seem necessary because a simple sideways, crooked glance would have been enough to tell me, as an audience member, what was wrong. I’m a bit disappointed because this acting was also the reason why I found the end predictable. There were too many implications and hints that told me this Caucasian family was fucked up.

The astronomically good thing about Get Out is the subtle (or maybe not so subtle) messages embedded into the film were interesting and related to events happening even today. There was heavy implication of racism, discrimination, and even slavery with a modern twist: a Caucasian girl defends her African-American boyfriend. Some people want to believe they are not racist but end up presenting themselves as such without actually knowing it.

What made my day, due to this film, is the broken stereotypes. I’ve heard “Asian girlfriends are crazy” or “the black guy usually dies.” And so, I found it funny that Get Out removes those stereotypes and adds a bit of comedy to them or flips them around. Overall, Get Out just didn’t thrill or scare me the way horrors used to.

Posted by Mariah Bonifacio at 11:07 AM