MARIAH's THOUGHTS on Beauty and the Beast (2017) Synopsis:
Disney's Beauty and the Beast is a live-action re-telling of the studio's animated classic which refashions the classic characters from the tale as old as time for a contemporary audience, staying true to the original music while updating the score with several new songs. Beauty and the Beast is the fantastic journey of Belle, a bright, beautiful and independent young woman who is taken prisoner by a beast in his castle. Despite her fears, she befriends the castle's enchanted staff and learns to look beyond the Beast's hideous exterior and realize the kind heart and soul of the true Prince within. The film stars: Emma Watson as Belle; Dan Stevens as the Beast; Luke Evans as Gaston, the handsome, but shallow villager who woos Belle; Oscar® winner Kevin Kline as Maurice, Belle’s eccentric, but lovable father; Josh Gad as Lefou, Gaston’s long-suffering aide-de-camp; Golden Globe® nominee Ewan McGregor as Lumiere, the candelabra; Oscar nominee Stanley Tucci as Maestro Cadenza, the harpsichord; Gugu Mbatha-Raw as Plumette, the feather duster; six-time Tony Award® winner Audra McDonald as Madame Garderobe, the wardrobe; Oscar nominee Ian McKellen as Cogsworth, the mantel clock; and two-time Academy Award® winner Emma Thompson as the teapot, Mrs. Potts.

Directed by Oscar® winner Bill Condon and based on the 1991 animated film, the film is produced by Mandeville Films’ David Hoberman and Todd Lieberman with eight-time Oscar-winning composer Alan Menken, who won two Academy Awards® (Best Original Score and Best Song) for the 1991 animated film, providing the score, which will include new recordings of the original songs written by Menken and Howard Ashman, as well as several new songs written by Menken and three-time Oscar winner Tim Rice. Beauty and the Beast will be released in U.S. theaters on March 17, 2017. 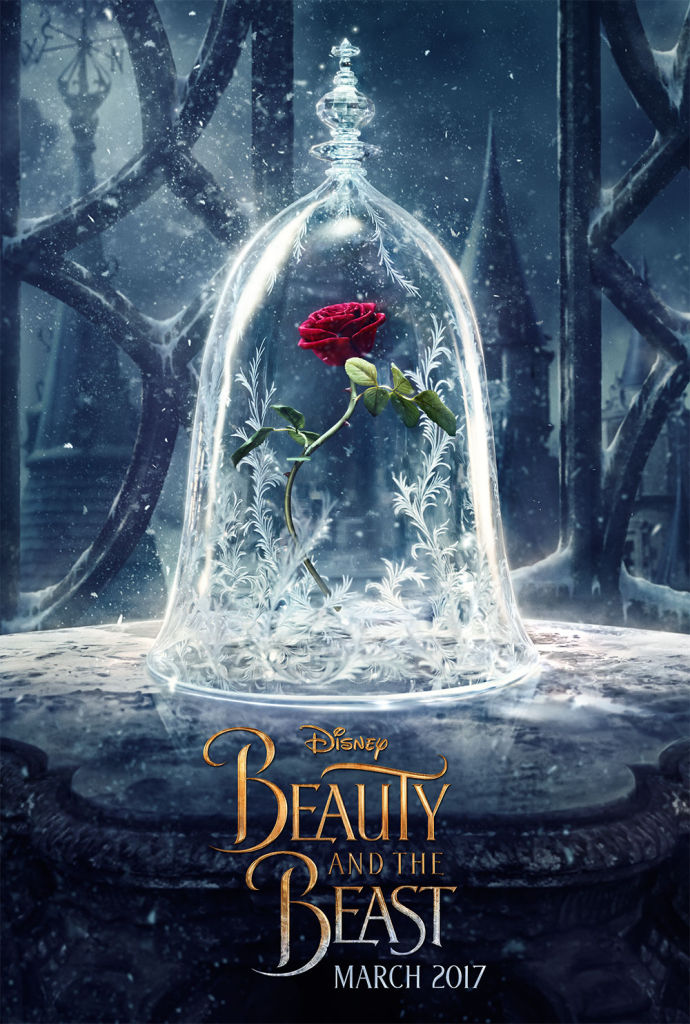 “A tale as old as time…” I honestly never cared for that phrase because, “No… people were not around that long to even make the tale.” But, anyway, what I do care about is Beauty and the Beast. It certainly is ageless. Whether the audience members buy a ticket because they remember the 1991 animation or are Disney fans in the making, the 2017 version is a beautiful display of a story I loved since I was a baby.

The set, stage, and music were on point. The colors, design, and overall composition helped set the mood for each scene. For example, the dark woods leading to the castle had a strict color scheme of black trees, white snow, and undertones of light blue that created a feeling of dread. The castle was always in the shadow of a cloudy sky and had a gothic theme i.e. black arches, gargoyles, etc. It wasn’t until the fairy tale ending the mood was uplifted with a drastic change from gothic to bright, extravagant, and golden. My favorite set up was for Be Our Guest. It had heavy contrast from the background and the colorful napkins and plates. Be Our Guest focused on the servants and showed off the little details in their golden curves and designs, while playing with food.

If I had to nitpick about something, it would be the size of the some of the rooms. The library and dining room seemed a bit too small for a large castle, but I’ll let it go.

The acting is nothing to scoff at, as I find it difficult not to enjoy a fun musical. (Unless, the musical is pure singing that I can’t understand.) My favorite is probably Ewan McGregor as Lumière. It was mostly the accented voice but he was too friendly and welcoming for me not to love. Emma Watson as Belle, I thought, was a lovely choice. Not only is she popular from her previous works but she easily embedded herself in to her role as an adventurous bibliophile and became the face of (live-action) Belle. Although, she could have cried a little bit more at the end when the last rose petal dropped. The best acting came with the scene of the last petal, when the servants said their final words as household objects. As an audience member, I could feel their devastation and sorrow, as if the cast really had been trapped together under a curse for 10 years.

The story itself should be no surprise but I enjoyed the extra effort put in to make the curse a bit more tragic. Forgotten, alone, and trapped in a foreboding castle, surrounded by a black forest, the Enchantress’s curse should have kept the curse incubated until death. The story became more tragic, as I don’t remember the original story having the curse’s condition in which the servants transform even further into inanimate objects when the last petal fell. Being stuck as a talking, moving candlestick or clock is bad enough, but losing all traces of your humanity, consciousness, and freedom and becoming an antique without a chance to escape is heartbreaking. Good thing, that isn’t how the story ends. The writers also expanded the Beast’s backstory by giving and taking away his mother at a young age, and thus making him more human, rather than a shallow prince charming.

Overall, I enjoyed this rendition of Beauty and the Beast especially because of the message, “Don’t judge based upon appearances.” It was sweet, sad, the animation was beautiful (even though I’m not a glitter person), and it’s an ageless story.

Posted by Mariah Bonifacio at 3:10 PM