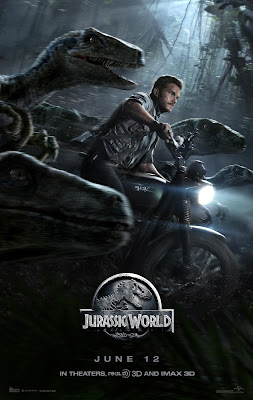 Based on characters created by:
Michael Crichton

Plot Summary:
Located off the coast of Costa Rica, the Jurrasic World luxury resort provides a habitat for an array of genetically engineered dinosaurs, including the vicious and intelligent Indominus rex. When the massive creature escapes, it sets off a chain reaction that causes the other dinos to run amok. Now, it's up to a former military man and animal expert to use his special skills to save two young brothers and the rest of the tourists from an all-out prehistoric assault.
source

One star for the creativity in the recreation of the theme park, one and a half for continuing the Jurassic Park lineage, and one star for the "performance capture" dinosaurs. Jurassic World plays on the same story as the first movie, but the fully functional park of Jurassic World is lively, vibrant, and futuristic. These three words describe not only the park but the movie as a whole, for there is nothing primitive in Jurassic World and that includes the dinosaurs. As said earlier the story is the same as the first movie, but with a supposedly bigger, more dangerous threat. While I respect the screenwriters for sticking with that traditional concept, "three strikes you're out," it was already overdone; "a bit" being an understatement. But thank God they added in underlying stories to the movie such as: relationships between the characters, greed in trying to gain the battlefield advantage, and a loving touch needed to care for gigantic, majestic... hungry beasts. Jurassic World touches on the cute factor with the herbivores, amazement for the carnivores, and fear in respect for the predators; more of a fascination for the predators rather than fear though.

In a 3D screening, the dinosaurs are far more beautiful than the actors/actresses in the movie. They show more emotion than animatronics and more potential than CGI, like they're supposed to. Therefore, the only emotional attachment I had to this movie was the death of many weaker or smaller dinosaurs by the main antagonistic creature created in the lab rather than the humans that should've had my sympathy. The movie looked good, but at first glance, was unconvincing considering plot holes such as running away from a T-rex at a few feet distance in heels, the main antagonist itself, or technical difficulties with a jeep.

While I think it's okay to have a "Jurassic Park" and working with what you already know for real life use, Jurassic World should step down from trying to create a nearly indomitable killer because apparently the park was doing okay... until all hell broke loose.

Posted by Mariah Bonifacio at 6:05 PM