MARIAH's THOUGHTS on One Piece: Stampede (2019) 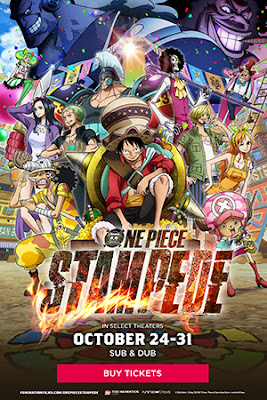 Plot Synopsis:
The world’s boldest buccaneers set sail for the great Pirate Festival, where the Straw Hats join a mad-dash race to find Gol D. Roger’s treasure. There’s just one little problem. An old member of Roger’s crew has a sinister score to settle. All bets are off when the most iconic pirates of One Piecehistory band together for a swashbuckling showdown, the likes of which have never been seen!
source

One Piece: Stampede, hyped and highly anticipated, was an action adventure fantasy film that I was incredibly excited to see. The synopsis of the film was as follows, Buena Festa, a master of festivals and parties, invites pirates from all over the One Piece world to participate in a Pirate Festival where the grand prize will lead them Gol D. Roger’s legendary treasure, the One Piece, on Laugh Tale. But little did anyone know that Buena Festa’s ultimate goal was to use the escaped prisoner from Level 6 of Impel Down, Douglas Bullet, as a catalyst to “start a new era” that would overshadow Roger’s era of piracy. To do this, Buena Festa made a deal with the World Government to collect as many pirates onto one island and have them make a “Buster Call,” the mass eradication of an island and its inhabitants, and with it display the power of Douglas Bullet the man who rivaled Gol D. Roger in power. This synopsis alone piqued my interest enough to want to see Stampede in theaters.

The film started on the deck of the Thousand Sunny, the main ship of the Straw Hat pirates and main protagonists. They explained what the Pirate Festival was and that the prize was a key to Gol D. Roger’s One Piece, the ultimate treasure for every pirate sailing the seas. From there, the film rushed through thirty minutes of introduction in the form of a Straw Hat pirates shopping spree and quick introductions of members from the Worst Generation. With that being said, Stampede required some background knowledge of One Piece to really enjoy it. Despite that, Stampede could easily make new fans’ interest pique with the appearance of different character designs and their personalities. While this was true, I must admit that there were some bland moments and some predictability to the plot of the film, such as Luffy dealing the final punch to Bullet with a giant fist and “Talk no Jutsu.”

I would say the overall plot of this film was lacking in pizzazz. The main antagonist, Douglas Bullet, was so bland and cliché, I forcefully stopped my eyes from rolling into the back of my head by focusing on the screen. Bullet was large, buff, strong, arrogant, and had a devil fruit that demolished an entire city in moments. He saw friends and comrades as burdens and wanted to be the strongest man alive. But what else is new? He was lacking in any sympathetic or redeeming qualities. And Buena Festa was hardly worthy of being called an antagonist. The only thing he did do was act like a narrator to the film while Bullet fought against everyone else. The plot was so predictable that I even figured how Law, Smoker, Hancock, Luffy, and Sabo would defeat Bullet after seeing his devil fruit, the Clank-Clank fruit. Basically, break through Bullet’s haki and whittle him down to deal a finishing blow.

What really got me excited to see Stampede was the cameos of some of my favorite characters, members of the Worst Generation. I was particularly fond of Eustass Kid, Killer, Jewelry Bonney, and X Drake getting some screen time and seemingly having fun. I was excited to see my One Piece sons, Kid and Killer, so much so that I squealed and squirmed in my seat when Killer flew onto screen and clashed with Zoro. Speaking of appearances, the animation of the film was amazing and fluid. It had a sumi-e, Japanese black ink painting feel to it. However, the artwork seemed a little weird to me. For example, Sanji and Zoro in particular looked a little lanky or scrawny in comparison to their usual anime appearance. That did change later in the film for Zoro when he was fighting the Marines and Vice Admiral Issho. At that point in the movie, Zoro’s muscles became more defined.

The hype was more exciting than the movie. It was a movie of cameos, flashy attacks, and fast paced battles to keep the adrenaline pumping. It can easily make it into someone’s top five favorite One Piece films, but for me, it was simply pretty. Overall, One Piece: Stampede was entertaining but the pacing could have been dealt with better.

Posted by Mariah Bonifacio at 8:13 AM